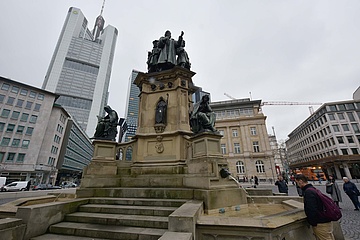 How can you clearly tell in Frankfurt that summer is approaching in leaps and bounds? By the blossoming of trees and flowers? By the fact that the city's ice cream parlors have reopened or that Caf&eacute;s are bringing their outdoor seating out of winter storage? These are all signs that spring is here. But the clearest sign is that Frankfurt's fountains are bubbling again. And that is now indeed the case again, because on Friday, April 5, the fountain season was officially opened with a traditional "water march" at the Gutenberg monument on Rossmarkt by the city's head of culture, Ina Hartwig. The monument, which is also a fountain, will gradually be followed by the other fountains in Frankfurt's urban area in the coming days.

On the choice of the first fountain this year, Hartwig said: "Without Gutenberg and his comrades-in-arms, there would be no modern information society and no book fair city of Frankfurt. In the midst of our pulsating Main metropolis and in front of the bank towers reaching into the sky, this fountain offers welcome refreshment in the hot summer months and invites you to linger."

The Gutenberg Monument, which is more than 160 years old, commemorates the inventor of letterpress printing with movable metal type, Johannes Gutenberg, as well as the printers and publishers who worked with him in Frankfurt. Johannes Gutenberg with the movable letter and a large book (Gutenberg Bible), typographer Peter Schöffer, carrying some tools, and Gutenberg's creditor Johann Fust stand larger than life in the middle of the steps. Under the main cornice are 14 medallion portraits of famous book printers, including the heads of the Frankfurt printers Egenolff, Feyerabend, Andreae, plus patrons and sponsors of the art of printing and a portrait of the creator of the monument. Below them, in niches, are four heraldic figures representing the four first printing cities of Mainz, Strasbourg, Venice and Frankfurt.

Four allegorical figures embodying theology, poetry, natural science and industry sit on low pedestals. The gargoyles in the form of elephant, lion, llama and bull above the fountain bowls represent the then known four continents of Asia, Africa, America and Europe, symbolizing the worldwide spread of the invention. On the commemorative plaque is the inscription: "In honor of the invention of the art of printing erected at the fourth secular celebration on June 24, 1840."

The Gothic-style fountain monument was unveiled on Roßmarkt in 1858; Eduard von der Lausitz, a teacher at the Städelsche Kunstinstitut, had made it.

In Frankfurt there are 150 municipal fountains. Of these, 110 are looked after by the city's cultural office. For the operation, maintenance and care are available annually about 321,000 euros from the budget of the Cultural Office.

Through the fountain program launched in 2007, an additional 100,000 euros are available annually until 2020 for necessary renovations that can not be financed through the annual budget. With these funds, the Lucae and Marshall fountains, among others, have been extensively renovated in recent years. Since last year, the Sindlinger Ranzenbrunnen has been bubbling again. "This year, the plan is to equip the Struwwelpeter fountain and the fountain on the Freßgass with functioning technology and to seal the technical rooms," said the head of culture.