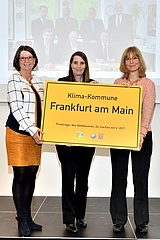 (kus) Minister Priska Hinz awarded the project "Regional Energy Concept" with the special prize "Together for the climate - intercommunal cooperation" during the municipal climate conference "Klima Kommunal". She presented the prize to Wiebke Fiebig, Head of the Energy Department, and Kirsten Schröder-Goga, Head of the Energy/Environment and Innovation Department of the FrankfurtRhineMain Regional Association.

"The switch to a completely renewable energy supply can only succeed as a major joint effort," said Frankfurt's Head of the Environment, Rosemarie Heilig. "I am therefore very grateful that the FrankfurtRhineMain Regional Association and its member municipalities are working with us to advance the energy transition. In this way, we will be among the first metropolitan regions to meet the goals of the Paris Climate Summit and be fit for the new post-fossil age."

Association Director Ludger Stüve said of the outcome of the competition: "Regional cooperation is our core task. We are delighted with the award and will continue to work together with the City of Frankfurt on climate protection and the energy transition in the region."

The City of Frankfurt and the FrankfurtRhineMain Regional Association have been jointly coordinating work on the Regional Energy Concept FrankfurtRhineMain since 2013. The aim is to make the energy supply in the city and region 100 percent efficient and renewable by 2050. First of all, energy checklists were drawn up for the 75 municipalities in the association, and then the climate protection activities of the municipalities and districts were compiled. 150 experts from 100 institutions worked out 48 proposals for measures in strategy groups.

The projects submitted to the competition were evaluated by an interdisciplinary jury. In particular, projects that took a holistic approach and met as many criteria as possible were deemed worthy of an award. These include innovation and creativity, which include innovative and creative measures and solutions for climate protection or climate adaptation. Another criterion is effectiveness in the use of resources. In concrete terms, this means effective use of financial, material and human resources.

Involvement of stakeholders is also important. This means the involvement of different actors, such as businesses, retailers, associations, schools, local press and the public. In addition, projects should fulfil the criterion of effectiveness. This is defined as an effective contribution to climate protection or adaptation to the consequences of climate change. Transferability is also important: The projects can act as role models and can be implemented in a comparable way in other municipalities.

Further information on the award winners can be found at