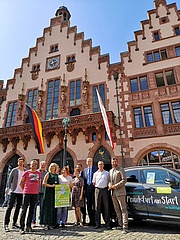 In no less than four districts - Oberrad, Rödelheim, Nied and Brückenviertel - four trade shows with an extensive accompanying program will take place in the coming weeks. These will be held as part of the "Frankfurt at the Start" campaign and will give local tradespeople the opportunity to present themselves to a wide audience. The first of these will be held on 7 and 8 September in Oberrad. Just two weeks later, on September 21 and 22, the Rödelheim location will celebrate its premiere, and on October 12 and 13 Nied will also present itself as a new location with the trade show in the district. This year's series will be concluded by the Brückenviertel on October 26 and 27.

This means that the range of "Frankfurt am Start" has been significantly expanded compared to the previous year, which Markus Frank, head of the Department of Economic Affairs, is very happy about: "I am very pleased that our Frankfurt trade associations are taking up the Frankfurt am Start action programme so well. In addition to offering local businesses a highly visible platform for their own presentation, it is also a very good opportunity to work together to raise the profile of the district. We would like to support this. Urban and lively districts are home in our vibrant city and of immense importance for the future viability and the attitude to life in Frankfurt am Main," explains the head of the Economic Development Department.

The team of the Economic Development Department supports the trade associations and communities of interest as organisers in the implementation. Oliver Schwebel, Managing Director of the Economic Development Agency, explains: "The fact that Oberrad and the Brückenviertel are once again involved is proof for us that the concept is convincing. I particularly like the momentum that each trade show develops on its own - that's exactly what we hoped for."

For example, this year in Oberrad there will be plenty of information and also a stage talk on the subject of training, in addition to the topic of "green sauce". Also Rödelheim takes up this focus, in addition still another emphasis lies here on the topics "Fit & healthy in Rödelheim". In Nied, a special show on "Safety, fire protection and energy around the house and building" is planned just in time for the start of the dark season. In the Brückenviertel, the focus is on "Fashion & Design". The creative quarter will be specially decorated with the popular highlight "Late-Night-Shopping".

The announcement of the trade shows will be made in cooperation with the partners of the action programme, coordinated with the locations, via billboards in the city area, advertisements in daily and weekly newspapers as well as event magazines, radio spots and promotions, online banners, in the social networks as well as on the website www.Frankfurt-am-Start.de and via the channels of other partners.

Detailed information can also be found at: http://www.Frankfurt-am-Start.de