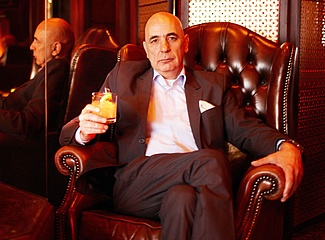 Chief of the former Casablanca Bar at Le M&eacute;ridien Frankfurt worked at the Hotel am Wiesenhüttenplatz for 37 years

He was bartender of the year, conceived Germany's first theme bar, wrote the world's first book on raki cocktails - and mixed and created countless cocktails with great passion: Ahmet Ayberk, head of the Casablanca Bar at Le M&eacute;ridien Frankfurt, which was open until 2017, is retiring after 37 years at the same hotel. "This marks the end of an era in Frankfurt bar culture," notes hotel director Wolfgang Selinger. "Ahmet is a true artist in the bar scene, a host with passion and a good friend to many regulars. The popularity of the former Casablanca Bar in our hotel was clearly due to him."

In 1982, Ahmet Ayberk came to Le M&eacute;ridien on Frankfurt's Wiesenhüttenplatz, which was then called Parkhotel. He started out as the Parkstube's assistant restaurant manager, then ran the legendary Casablanca Bar and was instrumental in the development of what is now The Legacy Bar. Before and during his time in Frankfurt, he gathered inspiration and know-how in Singapore, St. Petersburg and Salvador, among other places. The Turkish-born chef can therefore draw on an extensive pool of ideas and recipes for cocktails of his choice and mix each guest his own individual drink. Favorites among his cocktail ingredients are his homemade bitters.

Ayberk has received numerous international industry awards and was one of the first bartenders from Brazil to bring the caipirinha to Frankfurt. Together with Fatih Akerdem, the second Frankfurt bartending legend from The Westin Grand Hotel, he wrote the cocktail recipe book "Raki Nights", at the time the first of its kind worldwide. "Thank you, my friend, for the fabulous time and the unforgettable moments," Akerdem tells the future retiree.

Instead of a big farewell party, Ahmet Ayberk has wished for a quiet dinner evening in a small circle. "With him goes not only a city-famous personality, with him go countless stories and the last &sbquo;piece' Casablanca Bar," said Wolfgang Selinger. Miguel Pereira has already taken over as bar manager at The Legacy Bar for a few months now. He has adopted Ayberk's bitters, smoked drinks and recipes, so his legacy in bar culture is secure.

The Le M&eacute;ridien Frankfurt, with 300 rooms and suites, is located in Frankfurt's hip Bahnhofsviertel, on a leafy city square that is considered a hotspot for the gastro and nightlife scene. The hotel is just a few minutes' walk from the main railway station and the banking and business district, the Museumsufer is within easy walking distance and the airport within 15 minutes by car. In-location for casual fine dining with smoked and barbecue specialties is The Legacy Bar & Grill. For meetings and events, the hotel offers 10 function rooms with more than 600 square feet of space. The Le M&eacute;ridien Frankfurt implements the group-wide art program "Unlock art" through a partnership with the Schirn Kunsthalle, one of Germany's top addresses for contemporary art.