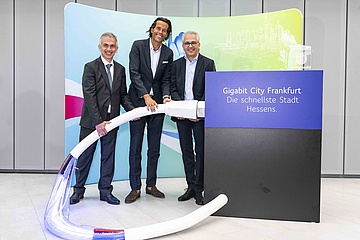 (ffm) Frankfurt, the metropolis on the Main River, will be the first city in Hesse to have near-area coverage with gigabit-speed Internet. Frankfurt's network expansion into a gigabit city was announced by cable network operator Unitymedia, Wednesday, June 6, in the presence of Frankfurt's mayor Peter Feldmann and Hesse's economics minister Tarek Al-Wazir at the Hesse Broadband Summit in Frankfurt.

Following Bochum, Unitymedia is now bringing Frankfurt, the next major city, into the gigabit age. In October, around 380,000 Frankfurt households as well as businesses will receive access to gigabit speeds. To this end, Unitymedia is equipping its fiber-optic-based cable network in Frankfurt with gigabit-capable network elements and implementing the new DOCSIS 3.1 transmission standard, which is the basis for gigafast data transmission and enables broad coverage with gigabit bandwidths.

Wherever a Unitymedia cable connection is available, private households and companies will have access to high-speed Internet with up to 1000 Mbit/s in download and up to 50 Mbit/s in upload from October.

"Frankfurt remains the Internet capital of Germany and with the Internet speed of 1000 megabits per second sets another milestone in its urban development. Frankfurt is home to the world's largest Internet node as well as numerous data centers. High bandwidths enable Frankfurt's citizens to participate in the digital world and local companies to tap future economic potential," said Mayor Feldmann.

Lutz Schüler, CEO of Unitymedia added: "With Frankfurt, we are consistently continuing our gigabit network expansion program and leading Germany into the gigabit age. After Bochum, Frankfurt is now also getting extra-wide data highways and will become the fastest Internet city in Hesse. I am particularly pleased about this, because in a financial metropolis like Frankfurt, many companies and private households depend on super-fast connections to the data highway."

Tarek Al-Wazir, Hesse's Minister for Economic Affairs, Energy, Transport and Regional Development added: "Broadband is the basic infrastructure for the digitalisation of our society. It is essential for innovation and economic development, and it also makes a significant contribution to solving societal challenges. In Hesse, around 60 percent of households are to be supplied with up to 400 Mbit/s by 2020 - but the demands on bandwidths are constantly growing. On the way to the gigabit society, all stakeholders - state, private sector, municipalities - must work together. I am very pleased about Unitymedia's commitment in Frankfurt."