Frankfurt Book Fair 2020 is to take place
from FFM Aktuell 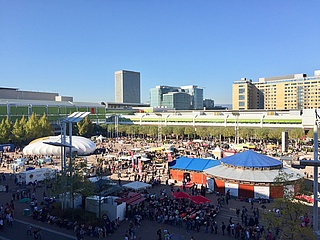 The news is in some ways surprising, but also gives some hope for more "normality" in the autumn: the supervisory board of BBG (Börsenverein des Deutschen Buchhandels Beteiligungsgesellschaft) decided today that the Frankfurt Book Fair 2020 will take place. In order to achieve this, while at the same time ensuring the best possible security for all exhibitors* and visitors*, the Frankfurt Book Fair (14-18 October 2020) is to take place not only on the exhibition site, but also decentrally in the city and also virtually.

The staging of the 72nd Frankfurt Book Fair on the exhibition site is based on a detailed health and hygiene concept which implements the protective regulations of the state of Hesse which will then apply. The hygiene concept jointly developed by the Frankfurt Book Fair and Messe Frankfurt has convinced the Public Order Office and the Health Department of the City of Frankfurt. However, due to the very dynamic situation, this concept will have to be continuously adapted until October. In addition, a professional evaluation of the overall situation is essential, which in the worst case can of course lead to a cancellation if the situation deteriorates significantly again.

"The Frankfurt Book Fair is the showcase for the international book industry and for this reason, too, it has become increasingly popular in recent years - not only among trade visitors and the rights trade, but also among readers. It has become an international agora of intellectual exchange. We want to make use of this discourse character even in the crisis and maintain it for the future of the book industry", says Siegmar Mosdorf, chairman of the supervisory board.

How many exhibitors can come to Frankfurt is, of course, still in the stars at the moment. But exhibitors from all over Europe are definitely expected. Everything else will depend on future travel restrictions - and on the willingness of international publishers to take the risk of attending the fair in Germany again. Details of the programme planning and this year's campaign will be announced at the end of June.

"The Frankfurt Book Fair is part of the DNA of this city and also an icon of the fair industry. We are very pleased that the industry has decided to hold the Book Fair in 2020, which sends a very positive economic signal. As is always the case with Messe Frankfurt, the safety and health of all participants is a top priority. We have developed sophisticated measures with regard to distance rules, visitor guidance and hygiene and will adapt the concept to the latest findings and requirements. The implementation will be very structured and we will support the Frankfurt Book Fair with all our strength", says Uwe Behm, Member of the Board of Management of Messe Frankfurt.

More important than ever before will be the Digital Supporting Programme in 2020. It will cover the needs of both the participants on site and the virtual participants from all over the world: company and product presentations, events and formats for initiating business, contacting business partners, market trends and further education. "We are currently developing a range of digital formats which respond precisely to these customer needs and enable companies and players from publishing and related industries around the world to take part in the Book Fair 2020", explains Juergen Boos.

To inform book fans around the world about the new publications in the autumn of 2020, the Frankfurt Book Fair will also take place virtually for one week. Among other things, a BOOKFEST Centre is planned, from which the Frankfurt Book Fair and its media partners will present new publications and authors and initiate relevant discussions.</The big German public publishing companies - Verlagsgruppe Random House, the German Bonnier publishers, Holtzbrinck book publishers and Verlagsgruppe Bastei Lübbe - have initiated the idea of a new event concept within the framework of the Book Fair in exchange with the Frankfurt Book Fair. They are closely involved in the conception, communication and later also in the implementation of this idea.</p>

In addition, there are numerous initiatives from the book industry, which wants to contribute many ideas on digital and physical formats and which is in active exchange with the Frankfurt Book Fair.

The Frankfurt Book Fair is currently discussing a concept adapted to the situation with the organiser of the Guest of Honour appearance, the Canadian Ministry of Culture and Canadian Heritage. A decision is expected shortly.

The Frankfurt Book Fair 2020 - current planning status at a glance:

Trade visitor days are from 14 to 18 October.

At the weekend (17 and 18 October), the Frankfurt Book Fair will also be open to the public.

Admission: Admission is contactless after prior registration and self-information about the state of health.

Placement: Placement is expected to be completed by mid-July.

Stand area: The smallest possible stand area will be 8 m&sup2;. Exhibitors who have booked 4 m&sup2; will receive an additional 4 m&sup2; at no extra cost. All other stand sizes will also be increased according to a graduated model without additional costs.

Aisle widths: In addition, 1.5 metres of the aisle width in front of each stand will be added as additional communication space.

The aisle width in the halls is between 6-8 metres.

stages: This year, the large stages will be replaced as far as possible by digital or equalised, physical offers.

Book sales: On the Saturday and Sunday of the fair, visitors* can buy books at the legally bound retail price.

The ticket shop for trade visitor tickets will probably open on 01.08.2020.