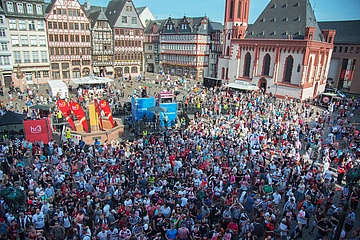 Even if it wasn't quite enough for the cup win in Berlin, the Eintracht players really delivered a respectable performance. And for it they were allowed to celebrate themselves on Sunday also by their fans so correctly. Mayor Peter Feldmann had invited the team to a reception in the Römer, from where they then presented themselves to their fans on the balcony. After tens of thousands of fans had joined in the excitement in Berlin and there was a great atmosphere in Frankfurt at the public viewing in the sold-out Commerzbank Arena despite the defeat, this reception on Römerberg was a fitting end to this exciting cup final.

Mayor Peter Feldmann, who watched the game himself in Berlin, welcomed the Eintracht team to the Römer. For him and everyone involved, it was clear after the grandiose final: the Fan Fest will take place, regardless of the outcome of the cup final in Berlin. He was thrilled by the good atmosphere in Berlin and is sure that Frankfurt's fans proved to be fair losers.

After the entry in the city's Golden Book, the Lord Mayor and the team went out onto the balcony, where the players were enthusiastically greeted by thousands of fans. The cheers and fan chants made it clear that even with a second place finish, Frankfurt is still damn proud of Eintracht. Neither the defeat in the final, nor the midsummer temperatures could stop the people on Römerberg from celebrating their SGE for all it was worth. And so, despite the disappointment, there was then still a more than conciliatory conclusion for the team, but also for the fans! 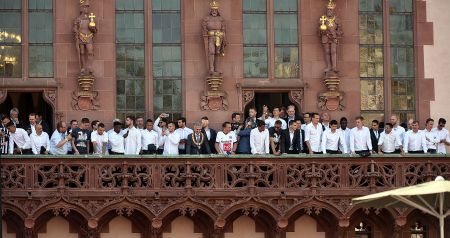