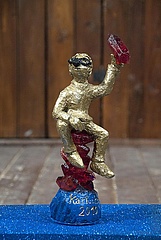 The ,Karfunkel 2019' honors theater under the direction of Ute Bansemir

(ffm) The Karfunkel Prize jury has made its decision on the awarding of the tenth Frankfurt Children's and Youth Theater Prize. Theaterperipherie" is honored for its outstanding theater work.

The jury explained its decision by saying that Theaterperipherie is a theater of participation that understands artistic and social work as inseparable. The productions "Illegal", based on the novel by Max Annas, and "Rettung", a play development with young actors and actresses newly arrived in Germany from the 2018/19 season, are exemplary of this.

Cultural Affairs Director Ina Hartwig, who chairs the award jury, emphasises the importance of the theatre and its special features: "Theaterperipherie" stands for an open theatre that is truly and genuinely dedicated to its participants and their topics and concerns. Under the direction of Ute Bansemir, theaterperipherie succeeds in being a place of debate." Both on and in front of the stage, Hartwig continues, young people in particular can be found beyond the conventional art and educational milieus; a much broader audience than in other theatres. Theatre periphery does not claim participation, it lives it and is constituted by it."

The award of the Karfunkel comes with prize money of 10,000 euros; in addition, the prize winner receives a prize figurine by the Frankfurt artist Andreas Gundermann, newly designed each year.

The award ceremony will take place on Tuesday, March 26, at 6 p.m. during the international theater festival for young audiences Rhine-Main "Strong Plays" in the Kaisersaal of Frankfurt's Römer.