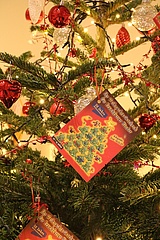 Besides many obvious things that are different this year - such as the cancellation of events, Christmas markets or the closure of cultural venues - there are also things that you might not think of right away that have to adapt to the difficult situation. One of these is the lovely campaign "Your Christmas present for Frankfurt children" run by the Frankfurt Children's Office, which celebrates its 25th anniversary this year. For a quarter of a century now, the campaign has ensured that needy children can also look forward to the fulfillment of a very special wish at Christmas.

The procedure is the same again this year: since Monday, November 23, wish cards have been hanging on Christmas trees set up in various shops. What is different, however, is that this time there are no individual wishes on the cards. Anyone who wants to give a gift takes off a card, buys a board game or book of their choice for the age group indicated. Those who wish can also write their own greeting message on the card. He or she will drop off the gift with the wish card at one of the participating stores or the Children's Office by Monday, December 14. The gifts will be collected by the Children's Office and distributed to the participating institutions, such as refugee facilities and drug support facilities, shortly before Christmas.

The pandemic has made it necessary to change this Christmas promotion: "Quite deliberately, we have chosen the two categories &sbquo;board game' and &sbquo;book'. Being able to immerse ourselves in a different world for a while is good for all of us at the moment - children probably even a little more so," says Sylvia Weber, Head of Department for Integration and Education. "We are pleased to be able to carry out the anniversary edition of the Christmas campaign despite the adverse circumstances. Please support the campaign again this year. I wish everyone a restful and peaceful holiday season and a healthy new year."

A Frankfurt Success Story of Giving

25 years ago, the City of Frankfurt's Economic Development Department conceived the idea of giving poverty-stricken children a better Christmas. The impressive balance: since 1996, more than 70,000 presents have been handed over - in the beginning, there were 600 annually, now there are 5000. "I am pleased that people have been enthusiastic about this campaign for so long. They all take on social responsibility and make children's eyes light up," says Sylvia Weber.

It is to be hoped that the campaign will be a complete success again this year, even though fewer people come to the city centre and many businesses where the cards hung on the Christmas trees in previous years have currently switched to home offices.