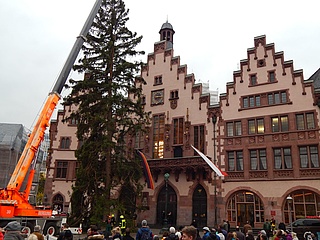 It's that time again: the Christmas tree naggers are already in the starting blocks to shoot their mouths off about the new tree that will adorn the Römerberg starting today - at least until it shines in bright splendor for the opening of the Christmas market. Then it will probably be "the most beautiful tree we've ever had" again ;-) But it will still take a while until that happens. Today, Mayor Feldmann first received the Christmas tree, a gift from the Schmallenberg Sauerland, from the mayor of the town of the same name, Bernhard Halbe.

A number of onlookers and media representatives gathered on the Römerberg again this year to witness the handing over of the tree and to watch the employees of the fire department erect the landmark of the Christmas market. And as soon as it was erected, the first prophecies of doom began. But for Lord Mayor Peter Feldmann, grumbling about the Christmas tree is simply part of the job. Because he knows: At the latest when the lights on the tree shine for the opening of the Christmas market, the grumblings usually fall silent.

The arrival at the Römer, however, turned out to be somewhat difficult, as in the previous year, because when the transporter wanted to turn from Berliner Straße in the direction of Römerberg, there were simply too many road signs and traffic lights in the way. But skillful maneuvering, a lot of pushing and pulling, the tree finally found its way to its new home around 1:30 p.m., where it was then erected just under two hours later.

Now, however, the tree's branches must first hang out in peace before the tree is still decked out and decorated. The 36 m high, 11 tons heavy and 124 years old red spruce, which would have had to be cut down next year anyway, thus stimulates a lot of discussions again - before it will then provide a very special atmosphere on the Römer in a few weeks. And let's be honest: a tree you can't complain about is almost a bit boring ;-)