Frankfurt Christmas tree comes from Austria in 2020
from Frankfurt-Tip 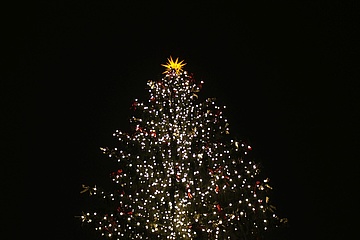 All those who feared that this year, due to the cancellation of the Christmas market, you can't nag about the Christmas tree on the Römer in a nice tradition, can breathe a sigh of relief: soon enough, a festively decorated spruce will provide a little bit of Christmas spirit here. In contrast to other cities such as Dortmund, where a large Christmas tree is being dispensed with this year, the City of Frankfurt and Tourismus+Congress GmbH Frankfurt am Main (TCF) are bringing a tree to Frankfurt despite the Corona-related Christmas market cancellation. A really nice Christmas surprise for which we would like to say THANK YOU to those responsible!

This year, Frankfurt's Christmas tree comes from Austria - more precisely from Gröbminger Land in the Styrian holiday region of Schladming-Dachstein. The spruce, which goes by the name "Bertl", will be cut in the next few days and then brought to Frankfurt. The tree is named after Norbert "Bertl" Lemmerer senior, the former chairman of the Gröbminger Land tourism association. Lemmerer had already initiated the donation of the tree and the associated presentation of Gröbminger Land in Frankfurt in 2014. Unfortunately, Lemmerer himself can no longer witness how his project will be implemented and provide joy even in these difficult times.

Mayor Peter Feldmann is delighted about the imminent arrival of "Bertl": "A stroke of luck for the tree, which has to be felled due to an upcoming stream renovation and will be ennobled with many thousands of lights in Frankfurt to become the Frankfurt Christmas tree."

The arrival of the Christmas tree on Römerberg is always a special moment, which is attended not only by numerous members of the press, but also by many Frankfurt residents year after year. Precisely for this reason, the exact arrival and installation date will not be announced this year. The intention is to avoid crowds during the erection. Nevertheless, it is good news that the approximately 30-metre-high "Bertl" will soon be coming to Frankfurt and will then provide a little festive splendour in a few weeks - and at a time when we have to do without so much. No question: we are looking forward to "Bertl"!