Frankfurt Cleanup - Our city should become cleaner
from FFM Aktuell 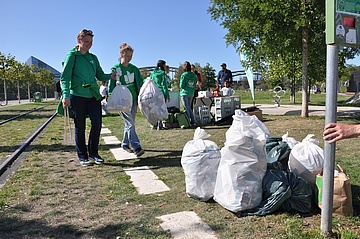 About 1000 people at the first citywide cleanup day &sbquo;Frankfurt Cleanup'

It may not sound like a very big number, but a respectable respect success it certainly is: After all, around 1000 Frankfurt residents answered the call to participate in the first city-wide cleanliness day "Frankfurt Cleanup" last Saturday. The feedback beforehand was so positive that the registration deadline was extended by a week. In addition to individuals, more than 50 groups registered. These included local community groups, families, companies and sports groups. There were also people who decided quite spontaneously to make the city a little cleaner.

"I am delighted that so many people have joined in and made our Frankfurt clean together," said a delighted patron and Head of the Environment Rosemarie Heilig. "This makes our first Cleanliness Day a great success. We will keep at it. Next year we will call for another Frankfurt Cleanup," she promised. After all, rubbish is one of the big problems in Frankfurt - especially rubbish that is unsuspectingly thrown into green spaces and onto the streets. An action like this Cleanup Day can help to sensitize people to be a little more responsible with their garbage.

The "Frankfurt Cleanup" was organized and supported by the cleanliness campaign #cleanffm, the green spaces office and the FES. At 80 pick-up points in the city, FES and Grünflächenamt had collected the full garbage bags at the end of the cleanliness day.

According to an initial estimate, between three and four tons of garbage were collected in the entire city area. On the banks of the Main alone - between Eiserner Steg and Hafenpark - it was about 300 kilos of garbage. Among them were glass bottles and broken glass, pizza boxes and other packaging. But also e-scooters, even a refrigerator. "How many kilos or tonnes of rubbish we collected is not the decisive factor in the end," said the head of the environmental department. What is more decisive is what is carelessly thrown away. "We collected an incredible number of crown caps. But above all also cigarette butts. Many smokers are apparently not aware of how much poison is in such a cigarette butt," said Heilig. According to the World Health Organization, one cigarette butt contaminates about 40 liters of groundwater through its ingredients such as nicotine, arsenic or lead.

"Fines alone are not enough here," Heilig said. "We need to make smokers aware that what they are doing is not just an aesthetic problem. In the end, they are harming all of us with their behavior. But we also need to hold the tobacco industry accountable. It should participate in actions such as the Frankfurt Cleanup, but also in educational measures," appealed the environmental department head.

You must not fool yourself: Unteachable environmental sinners will always exist. Even if even more trash cans are set up, a lot of waste simply ends up next to them out of convenience. But if such campaigns succeed in getting even a few people to rethink their own behaviour and realise that a few steps to the nearest ashtray or litter bin can go a long way, then we can certainly speak of success. And that's why the announcement that it will continue next year is very good news.