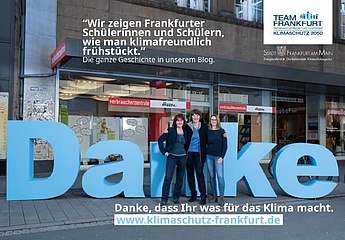 Thank you for doing something for the climate

(ffm) In 2019, Frankfurt's climate protection campaign "Thank you for doing something for the climate" puts the focus on concrete climate protection projects of individual initiatives, associations and companies. It starts in February with the climate breakfast of the consumer center Hessen. This is a project for pupils in years eight to ten, which uses a joint breakfast to teach how one's own dietary and consumer behaviour affects the climate.

"At 14 percent, diet contributes almost as much to a German's CO2 emissions as mobility," says Head of the Environment Rosemarie Heilig. "That's why it's important to sensitize young people to the topic already, for example with the climate breakfast. Thank you to Verbraucherzentrale Hessen for its commitment to climate protection and welcome to Team Frankfurt." The campaign is flanked by the new thematic focus "Nutrition" on the website www.klimaschutz-frankfurt.de . Here you will not only find a wealth of information on the subject of climate-friendly nutrition, but also tips on climate-friendly shopping, links to Frankfurt initiatives and interesting facts about organic logos. A blog post presents the climate breakfast in detail.

Interested teachers can email ernaehrung@verbraucher.de to get in touch. "Our biggest concern with the Climate Breakfast is to encourage self-reflection and to convey that when it comes to climate protection, food matters more than taste," says Bettina Meints-Korinth, one of the organizers of the Climate Breakfast. "The young people are almost always surprised at how many factors come together when it comes to food, such as transport routes or deep-freezing. They usually don't give that much thought to it beforehand," Meints-Korinth continued.

Climate protection campaign 2019 with many faces and stories

The energy department of the city of Frankfurt has selected four main topics for the climate protection campaign 2019, which fit well with the seasons. After kicking off with the theme "Nutrition", "Cycling" will be brought to the fore in spring when the weather is kinder again. This will be followed by "Solar Energy" in the summer and "Saving Electricity in Households" in the fall. All topics will be flanked by corresponding blog articles on individual Frankfurt projects by initiatives, associations or companies, as well as a corresponding thematic focus with further information on the climate protection website. The people, the faces behind the individual projects, are always shown and their stories told. At the heart of the campaign remains the simple and honest "THANK YOU", which conveys appreciation for the climate protection commitment of each individual and includes a positive appeal. "Since the launch of the campaign at the end of 2017, the website <link http: www.klimaschutz-frankfurt.de _blank>

has become the central contact point for climate protection topics in Frankfurt. Many climate protectors have already told us their stories there and we look forward to many more joining them in 2019," says Wiebke Fiebig, head of the city's energy department. The energy department developed and implemented the campaign together with the Frankfurt advertising agency Farr & Thamm
Share: