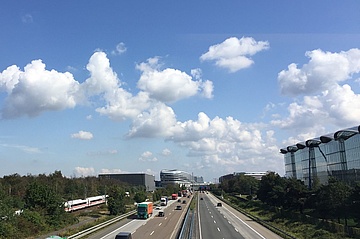 (ffm) The constant development and urban redevelopment of Frankfurt's West since the turn of the millennium also places complex demands on road users: Especially when the signage needs of large, medium and small trade fair events overlap with the routing of everyday traffic to multiple urban destinations, traffic engineering systems must be deployed to solve this challenge.

With the aim of guiding traffic safely and unambiguously in the west of Frankfurt from Westkreuz via Theodor-Heuss-Allee, Friedrich-Ebert-Anlage to Mainzer Landstrasse and in the area of Rebstockpark, a modern integrated traffic guidance system was developed in close and good cooperation between the City of Frankfurt am Main, the State of Hesse and Messe Frankfurt. For head of transport Klaus Oesterling, this is a matter of course: "Our Frankfurt continues to be at the forefront of digital traffic technology! We will thus do better justice to the special location of our trade fair in the core of our city, which will also benefit the surrounding residential quarters."

By integrating one- to three-line LED displays into the - previously static wayfinding - urban signage, it will be possible in future to dynamically signpost destinations in line with the situation. This will make it possible to react immediately to traffic disruptions and to intervene in a guiding manner. The targeted and uniform signage will improve the flow of traffic in the west of Frankfurt, minimise search traffic and reduce the risk of traffic jams.

A total of 69 locations, including 66 directional signs and three traffic sign bridges, are currently being built. As an integrated overall concept, these will be closely linked to the variable message signage on the A648 motorway, which went into operation in 2017. For this year's major event, the International Motor Show (IAA), a first construction phase with a total of 34 sign locations will now go into operation in the area around Rebstockpark. "Of course, they will be controlled via our Integrated Overall Traffic Control Centre," explains Councillor Oesterling. "So we are also fitting this component into our traffic management." To do this, it was necessary to lay over two kilometers of data cable and over five kilometers of power cable. In a second construction phase, the control system will then be completed.

Due to its importance in terms of traffic, the project is being financed with city funds amounting to 6.5 million euros, as well as funds from the transport infrastructure subsidy of the state of Hesse amounting to 4.2 million euros.