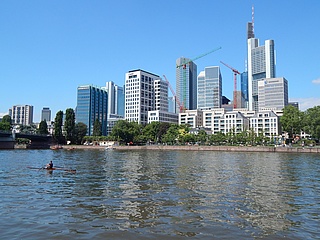 PART 2 of the outlook on the exhibitions and events of Frankfurt's cultural landscape, festivals and sporting events. In the course of the year, there may be deviations or changes in dates.

(kus) Women and children are the main protagonists of the second half of the year in many Frankfurt museums: various shows are dedicated to the work of Jil Sander, Jeanne Mammen, Maria Sybilla Merian and the lives of boys and girls of the Stone Age. The Jewish Museum is dropping anchor with the Pop Up Boat, and the Health Department is celebrating its 100th birthday with a show at the Institute of City History, among other places.

Social tensions, political struggles - the Weimar Republic was a time of social upheaval. And artistic revolutions: Artists, each in their own way, recorded the events of the years after the First World War, the struggle for democracy in Germany in their works. War casualties, poverty, intoxicating pleasures in the big city, the new image of women. In the exhibition "Splendor and Misery in the Weimar Republic. From Otto Dix to Jeanne Mammen" (October 27 to February 25, 2018), Kunsthalle Schirn brings together some 200 works by well-known and unknown artists. Works by Max Beckmann, Otto Dix, Jeanne Mammen, or Hans and Lea Grundig, together with historical photographs, films, magazines, and posters, form a panorama of the years between 1918 and 1933

At the same time Amsterdam. On 13 August 1925, Henri Matisse writes to his friend Pierre Bonnard: "Long live painting!". These words on a postcard mark the beginning of a 20-year correspondence between artist friends Matisse and Bonnard. From 13 September to 14 January 2018, the Städel is showing "Matisse - Bonnard. 'Long Live Painting'", the Städel is showing a good 100 paintings, sculptures and drawings by the two artists, setting them in dialogue and thus opening up perspectives on the development of the European avant-garde from the beginning of the 20th century to the end of the Second World War. Over decades, Bonnard and Matisse exchanged ideas and repeatedly addressed similar themes in their works - each in his own artistic signature.

The MMK Museum für Moderne Kunst is planning one of its largest exhibitions from November 25 to April 2, 2018. "Global Simultaneities. The MMK Collection in Dialogue with Latin American Art of the 1960s and 70s. On all levels of its main building on Domstrasse, works of American Pop and Minimal art as well as authoritative positions from Germany from the MMK's collection are juxtaposed with those from Latin American collections. In this way, ""Global Simultaneities" allows a new perspective on the museum's own holdings and broadens the view for non-Western positions.

In the exhibition hall of the Prints and Drawings Department, the Städel commemorates one of Frankfurt's most famous daughters: "Maria Sibylla Merian and the Art of Plant Representation" is the title of the show, which runs from 11 October to 14 January 2018. October to 14 January 2018 shows representations of flowers in drawings and prints from the 15th to 18th centuries. The focus, on the occasion of the 300th anniversary of her death, is Maria Sybilla Merian and her work as engraver, naturalist, explorer, painter.

One of the most influential fashion designers of her generation is Hamburg-based Jil Sander. From 4 November to 6 May 2018, the Museum Angewandte Kunst will present Sander's designs, her inventiveness, the impact of her design approach on the aesthetics, materials and form of fashion and product design, architecture and garden art in the world's first solo exhibition. The question of quality in design is the focus of the show's multimedia installations and tableaux.

Houses by Women and Traces of Children

Visitors to the Deutsches Architekturmuseum can get to know even more extraordinary women: with "Frau_Architekt - Seit über 100 Jahren: Women in the Architectural Profession", from 30 September to 25 February 2018, the DAM is going on a journey back to the time when it was anything but a matter of course for women to design houses. The exhibition traces an arc from Emilie Winkelmann, the first woman to open an architectural practice in Berlin in 1907, to Lotte Cohen, considered the builder of Israel, to Iris Dullin-Grund, who had a major influence on urban planning in the GDR, and Sigrid Kressmann-Schach, a highly enterprising entrepreneur in West Berlin during reconstruction, to contemporary women architects such as Gesine Weinmiller.

"Stone Age Children. Little Hunters and Gatherers." The Archaeological Museum goes in search of ancient children's traces from August 5 to December 3. Only in recent decades have archaeologists been able to make fleeting evidence visible: small handprints and fingerprints in caves or on vessels. The exhibition, which sheds light on the world of girls, boys and their families during the most recent period of the Palaeolithic Age, shows whether they actually came from children. Touching various exhibits allowed - for visitors young and old.

Not quite so far back in time goes the exhibition of the Institute for Urban History: "Enlightenment - Prevention - Protection: Frankfurt's Public Health Service". It tells the story of Frankfurt's first doctor - mentioned in a document in 1381, he primarily treated city employees - and traces an arc through the centuries to the tasks of today's public health department, from city hygiene to the fight against multi-resistant germs. The occasion is the 100th anniversary of the Health Department in 2017, and the exhibition runs from September 5 to April 8, 2018.

The Jewish Museum plans to anchor on the Museum Embankment again in September with the Pop Up Boat. The program includes workshops, readings, and talks with the staff and the director of the museum, which is also undergoing renovation and new construction next year.

Open Books and Literature in the Römer

Literature lovers will, as always, get their money's worth in the fall. Parallel to the book fair - in 2017 France is the guest country - they can meet their favourite authors, attend readings and discover new publications at Open Books (10 to 14 October) at various locations in the city centre. A day later, Literature in the Römer (11 to 12 October), a reading festival dedicated to 16 authors and their works with readings and talks in Frankfurt's city hall, will start.

On July 9, ironmen will compete in the Ironman European Championship Frankfurt in a 3.8-kilometer swim, 180-kilometer road bike ride and marathon run. The same running distance is completed by hundreds of participants in the marathon, which takes place on October 29.

On the Day of German Unity on October 3, the city invites you to a swinging citizens' festival on Römerberg: Jazz zum Dritten. Admission is free. Music lovers will get even more jazz from 24 to 28 October at the German Jazz Festival.

From 29 November to 3 December, the B3 - Biennale of the Moving Image will take place for the third time. Its guiding theme is "On Desire. On Desire." In and around Frankfurt, the B3 presents and addresses the latest trends and developments in the field of the moving image. Around 250 national and international players from the fields of art, media and technology will present their projects and discuss them with visitors.

The round of Frankfurt's major festivals in late summer and autumn begins on 4 August with the Mainfest - it will be celebrated on the Mainkai and Römerberg until 7 August. This is followed almost seamlessly by the apple wine festival at the Hauptwache from 11 to 20 August. From 25 to 27 August you can stroll through Frankfurt's exhibition halls at the Museumsuferfest or eat, drink, stroll and party on both sides of the Main. This is followed by the Rheingau Wine Market in the Freßgass' from 30 August to 8 September. On September 8, the Herbstdippemess (Autumn Dip Fair) starts, and until September 17, there's a lot of hustle and bustle on the festival grounds on Ratsweg. From 27 November to 22 December, the Christmas market invites visitors from Liebfrauenberg to Paulsplatz and Römerberg to the Mainkai for get-togethers, mulled wine and carousel rides.