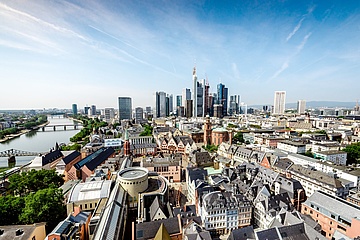 Strolling through the Palmengarten in a relaxed manner, enjoying the conviviality in the Kleinmarkthalle, wandering through the Bahnhofsviertel with friends or meeting up for a glass of wine at the farmers' market on Konstablerwache - none of this is currently possible in the usual form. And it will probably stay that way for a while. Of course, walks are still possible. Nevertheless, everything is different at the moment. But if you want to take a relaxed stroll through our beautiful city even in times of #WirBleibenZuHause, there are a few options: Reports about Frankfurt, as well as series or movies that have been filmed in our beautiful city. We have times some particularly worthwhile contributions for you:

The hr visited the Palmengarten, "Frankfurt's green living room", and in this beautiful report not only looks at the history of the botanical garden, but also gives a look behind the scenes. In the media library you can enjoy the approximately 45-minute reportage with many beautiful shots of the Palmengarten.

You can also stroll through the Botanical Garden relaxed from your living room. Discover this beautiful gem in Frankfurt and catch up on your visit there as soon as it's possible again. You can find the relaxing video with beautiful impressions HERE.

The Kleinmarkthalle - a truly special place full of special people, fascinating stories and special delicacies. This beautiful hr report makes you want to soon be beguiled again by the different smells and tastes to be discovered here. You can also watch this film in the media library. 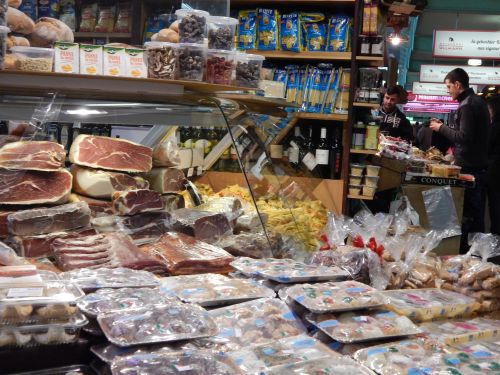 The Farmers' Market at Konstablerwache is probably Frankfurt's best known and most popular weekly market. This approximately 45-minute reportage not only shows the market action, but also introduces individual stall holders. Absolutely worth watching. This report can also be seen in the media library.

Walking is allowed - but please not all in the same place. The Main riverbank may be especially appealing in spring weather. But there are so many other beautiful places, as the report "On the Way in the GrünGürtel" proves, which you can watch in the hr media library.

There's usually a lot going on around Frankfurt's Eschenheimer Tor. Whether it's at the popular snack bar, which stays open until the early hours of the morning, or at the CineStar Metropolis, where big blockbusters can be enjoyed late into the night, especially on weekends. This hr report presents places, but also people from this part of Frankfurt.

The Bahnhofsviertel - a place of contrasts. An exciting, diverse quarter with many beautiful, but also numerous gloomy sides. A quarter between hipsters, junkies and green sauce, which is portrayed in this report worth seeing. You can see it in the media library of the hr.

If you want to get to know the Frankfurt main station in all its facets and also want to take a look behind the scenes, you should watch on Joyn to watch the series UNSER BAHNHOF, which reports in detail about everyday life at the main station. Very entertaining.

Until and including Easter Monday, actor, director, travesty artist, city councilor and city guide Thomas Bäppler-Wolf aka Bäppi La Belle will take you on an amusing Easter walk through Frankfurt. Every day a new clip will be published on his Facebook page. https://www.facebook.com/baepplerwolf

The Frankfurt City Events actually offer a variety of exciting themed tours through Frankfurt every day. Until that is possible again, the team has recorded some nice digital city tours, e.g. to Frankfurt's unplaces with Christian Setzepfandt, through the old town with Bäppi as apple wine hostess Lia, through the Kleinmarkthalle with Till Fischer or with Alexander Ruhe as night watchman through old Frankfurt. The videos, which are between 10 and 20 minutes long, are of course just appetizers to whet your appetite for booking the actual city tours after the crisis. The videos can be watched for free, but to support the city events, the city guides and the homeless project "Straßenblick" with WESER 5 a voluntary contribution between 5 and 20 Euro can be donated. You can find the videos and all further info at: https://www.frankfurter-stadtevents.de/topics/action-article/

For a nice tour of Frankfurt, check out this feature from WDR: A Day in Frankfurt

Strolling through the New Old Town is possible with this post on the grand opening of this crowd-pleaser:

And finally, a little time travel to 1954

Frankfurt in cinema and television 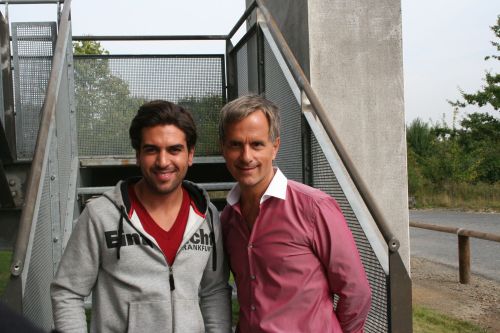 As a filming location, Frankfurt is particularly popular because of its impressive skyline. While many films only shoot short sequences in Frankfurt - e.g. the drama "Hin und weg" with Florian David Fitz, the series "You are wanted" with Matthias Schweighöfer or the gloomy drama "Die kommenden Tage" (which is definitely too depressing especially at this time) - other productions present our city much more prominently. We present you some selected TV and cinema productions here:

A classic! The story of a policeman who lets himself be infiltrated into the Frankfurt underworld as a V-man still works today - even though many of the places featured here no longer even exist - such as the Zeil-Galerie or the Royal Kino. Mario Adorf is simply smashing as the "Godfather of Frankfurt."

To see on DVD

The award-winning series takes an exciting look behind the scenes of the financial world. That Frankfurt plays a big role there, of course, goes without saying. Season 1 in particular is set to a large extent in Frankfurt and has some great shots of "Mainhattan" to offer in addition to the exciting story.

See on DVD, Blu-ray, Season 1 also on Netflix, Season 2 in the ZDF Mediathek (until the end of July)

Unfortunately, this Netflix series only made it to one season. While this mix of gangster thriller and drama from the rap scene isn't free of clichés, it is overall engaging and most importantly, great filmed. In addition to some great shots of the skyline, the Frankfurt connoisseur will discover locations from the Nordend, the Bahnhofsviertel and other parts of the city here.

See it on Netflix

Matthias Schweighöfer filmed this romantic comedy in Frankfurt and took perfect advantage of all this setting has to offer. Whether Mainufer, Eiserner Steg, Willy-Brandt-Platz - in this film Frankfurt looks really good. You're happy to put up with a few flat gags.

Only God Can Judge Me

Three Turks and a Baby

This comedy doesn't always ignite, but it's a lot of fun for long stretches. It was shot in the Brückenviertel in Sachsenhausen and in the Bahnhofsviertel, among other places. If you just want to switch off with some simple-minded, uninhibitedly silly fun, this is the place for you.

The film adaptation of the successful play was shot in a housing estate in the Riedberg district, in MyZeil and other locations in the city. With Christoph Maria Herbst, Elyas M`Barek and Detlev Buck prominently cast, the film doesn`t shy away from any raunch, but makes up for it with beautiful city views.

Yes, it may not be Christmas, but for Frankfurt lovers, this romantic ensemble comedy is worth a look even in spring-like temperatures. It becomes particularly amusing, for example, when the side entrance of the Alte Oper becomes the back door of a large department store. For this film, a mini version of the Christmas market was also set up on the Römerberg in spring. Well then, Merry Christmas! 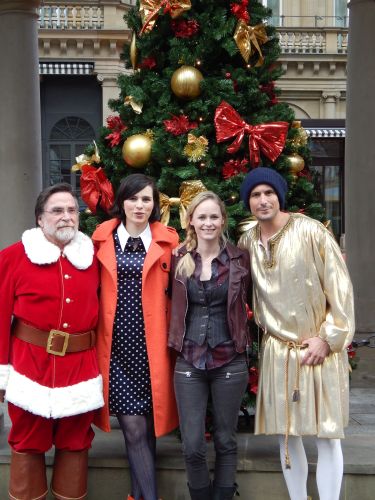