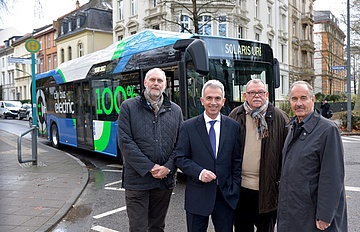 The first five electric buses for Frankfurt am Main have been ordered. For Lord Mayor Peter Feldmann, this is an important step into the future: "Local transport in Frankfurt is already largely electric thanks to the underground and trams, and is supplemented by a state-of-the-art, low-emission bus fleet. With the entry into electric bus transport, the city is consistently taking the next ecological step."

Following a Europe-wide tender and detailed assessments of the bids, the city's In-der-City-Bus GmbH (ICB) has awarded the contract for the delivery of the twelve-meter-long vehicles. The contractor is Solaris Bus und Coach S.A., which is already represented in ICB's fleet with 110 vehicles. The buses are to be deployed on route 75 from the December 2018 timetable change.

With the procurement of the five new buses, line 75 is to be fully electrified. The city's public transport company traffiQ, together with ICB, Mainova, Fraport and Verkehrsgesellschaft Frankfurt am Main (VGF), had commissioned a feasibility study that identified favourable operating conditions for electric buses in Frankfurt, with line 75 in the West End proving to be the most suitable.

The line 75 is a ring line with the start and end stop "Bockenheimer Warte". The buses travel via Zeppelin- and Miquelallee, Hansaallee and Bremer Straße to the Westend University Campus and from there back to Bockenheimer Warte. The Botanical Garden, the Palmengarten and the Senckenberg Natural History Museum are also served by this line. During the lecture periods, up to 2,600 passengers per day use the buses. Currently, the line is served with five rotations, i.e. by five (diesel) buses, during rush hour.

"We want to offer high-performance, attractive and modern public transport in Frankfurt. Low-emission drives and electricity from renewable sources are the focus here. This is where our municipal companies have a special ecological responsibility and we are pleased that ICB is leading the way together with traffiQ in terms of electric buses in Frankfurt. It is gratifying to see how quickly and straightforwardly the public transport authority, in consultation with a municipal bus company, can implement this goal, which is highly sensible in terms of environmental policy," said Lord Mayor Peter Feldmann.

Silent through the city - but not noiseless

In addition to the almost complete saving of CO2, one change is particularly noticeable: the significant reduction in noise. Engine noise is eliminated altogether, leaving the noise of the power units, the fans, the air conditioning and the rolling noise of the tires. Overall, there is a noise reduction of at least 10 dBA outdoors and around 20 dBA indoors. A reduction of 10 dBA corresponds to about a halving of the subjectively perceived noise level. This also means a significant increase in the quality of life for the Frankfurt residents affected.

The innovations also include the installation of a second double-sided monitor for passenger information in the special use area. This will provide even better information about subsequent stops and transfer options, particularly for passengers in the rear bus area. This fulfils a wish of the Passenger Advisory Board for the equipment of buses in Frankfurt's public transport system.

The vehicle has 28 seats and 42 standing places. Due to the placement of part of the batteries in the rear of the bus, seats behind the third door can no longer be offered. However, the vehicle's seating capacity of 70 is sufficient even during peak hours.

The purchase price of the vehicles, including the necessary charging infrastructure, is around 2.7 million euros. This makes the EBus about twice as expensive as a modern diesel bus with a Euro VI engine. These additional costs represent a major financial burden for ICB and the task-bearing organization traffiQ, which finances the operation of the lines.

The state is subsidizing the purchase of the buses with an additional cost subsidy of 40 percent as well as the installation of the charging infrastructure. In September, Lord Mayor Peter Feldmann was able to receive a funding notice for 760,800 euros from the Hessian Minister for Economic Affairs, Energy, Transport and Regional Development, Tarek AlWazir. This subsidy reduces the additional costs for operating Line 75 with electric buses to around 146,000 euros per year. Addressing the fact that these vehicles, including charging infrastructure, are more expensive than conventional buses, head of transport Klaus Oesterling said, "The willingness to finance a modern and environmentally friendly type of drive, even though more money has to be put in hand, shows how important the environmentally friendly development of public transport in Frankfurt am Main is to us."