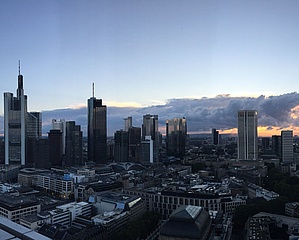 (ffm) On 18 March, the fourth regulation for the fight against the Coronavirus had come into force. On Wednesday, 25 March, the Corona crisis team founded by Markus Frank, head of the economics department, met for the second time. On this occasion, the city councillor said: "Together, we want to support small and medium-sized companies as unbureaucratically as possible, and at the same time fight for as many jobs as possible". </The consequences of the closure ordinance issued by the state on the basis of the infection protection law for various companies and facilities are dramatic. In the second meeting of the crisis management team, the Job Centre and the Employment Agency showed that applications for support and short-time work allowances are increasing significantly. Both institutions have adjusted their personnel and organisation to be able to provide assistance quickly and flexibly. </p>

Stephanie Krömer, Managing Director of the Employment Agency, reports that an additional 1,000 calls were received by the newly established service number. From consultation requests to application and processing, the Agentur für Arbeit is currently overrun. but the agency has already tripled its staffing levels. There are also various channels available, from faxes to in-house mailboxes, to deal with incoming enquiries and applications. Exact figures on the applications for short-time work benefits could only be given after the applications had been registered. Krömer advises all companies that are considering whether to apply for short-time work benefits to submit the notification online for the month of March in any case. It could in any case be adjusted in the course of the proceedings, but would be the basis for the short-time work allowance. </For the hotel and restaurant industry, it is stated that night bonuses are not taken into account in the short-time work compensation if they are tax and social security contribution-free remuneration components. This would affect this industry very much because these bonuses are an important salary component for the persons concerned. It is therefore likely that the consequence will be that an additional application for subsistence assistance will have to be submitted to the job centre. </Oliver Schwebel, Managing Director of the Frankfurt Economic Development Agency, states that there is currently a high proportion of mass redundancy notifications, which shows how difficult times are for many established companies. </It was with great pleasure that the news was received that the State of Hesse is topping up the federal emergency aid programme. </p>

• For companies with up to five employees, 10,000 euros in immediate aid will be paid (9,000 euros will come from the federal government)

• Companies with six to ten employees will receive 20.000 euros (15,000 euros from the federal government)

• 30,000 euros are available for companies with up to 49 employees. (The federal government does not provide immediate aid for this purpose)

For the crisis management team, it is important that the money is sent to the companies without bureaucracy. Both the IHK and the Chamber of Trade offered to pay out the money. The application details for Hesse are in the finalization stage and should be able to be applied for from Monday via the Kassel Regional Council. </Meanwhile, the employment agency is trying to identify new business cooperations: The personnel partnership between ALDI and McDonalds was mentioned as an example. Such cooperations would be supported in a target-oriented manner. Other topics and measures discussed by the crisis team included the future suspension of the levying of the tourism contribution, applications for the reduction of trade tax prepayments based on an initial deferral of six months, and the new regulations for the short-time working allowance of the Federal Employment Agency. </The crisis team will meet again on Friday, 27 March. In any case, it is recommended that all companies and businesses take a look at the homepage of the Economic Development Agency <a href="http://www.frankfurt-business.net" target="_blank" rel="noopener">www.frankfurt-business.net on which all offers of the state and the federal government are communicated. City Councillor Frank states: "Especially in these times it is important that the parties involved continuously exchange information, because rapid, targeted action is required to overcome the crisis". </The participants of the crisis team are </The participants of the crisis team are: -/strong>>>>