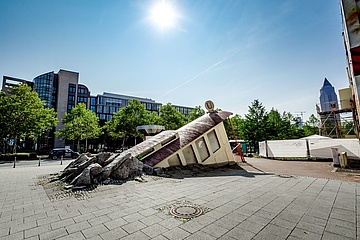 What to do so that there is not so often thick air in the city? One way might be to reduce the long waits at intersections for public transit (PT). In order to implement this, the municipal council of the city of Frankfurt decided in its meeting on Monday, July 8, to modernize 24 traffic lights. The aim of the digital modernisation is to ensure a smooth and punctual flow of traffic. The acceleration measures will reduce operational and traffic disruptions and increase punctuality and reliability. This is good for passengers' nerves and for the air in the city.

The funds for the modernization come from the city budget and the federal government's "Immediate Clean Air Program." However, the decision must still be approved by the city council. Lord Mayor Peter Feldmann and Head of Transport Klaus Oesterling welcome the decision as an important step towards a more attractive public transport system and a contribution to a healthier city climate.

Lord Mayor Feldmann says: "We are consistently working through the points of the NOx reduction master plan drawn up jointly with our neighbouring city of Offenbach. Our goal remains the creation of a healthier city climate and thus also the avoidance of driving bans. I trust here that the magistrate and city councillors will continue to support the head of transport in the fight for clean air and against driving bans."

The federal government contributes 589,000 euros, from the city comes 1.78 million euros. At five installations, the existing technology only needs to be adapted, nine traffic lights will receive a comprehensive update, and at ten others, the road traffic office will completely renew the entire hardware, including the control cabinet, for digital operation.

"The attractiveness of our buses and trains as an alternative means of transport to one's own car, and thus also as a contribution to cleaner air in our city, stands and falls with their adherence to the timetable. With the available federal funds, we can now quickly continue the measures for public transport acceleration at traffic lights along the tram line 12 and the important bus line 36, which have already been carried out in the past years," explains head of transport Oesterling.