Frankfurt filmmaker competes in the 99FIRE-FILMS-AWARD
from FFM Aktuell 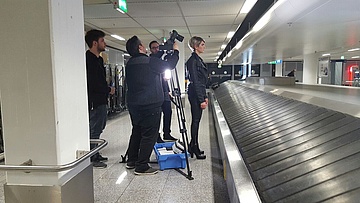 This is a real challenge even for experienced filmmakers: once the theme has been announced, participants in the 99FIRE-FILMS-AWARD have 99 hours to conceive, shoot and edit a 99-second short film on that theme. The finished work must then be submitted in time to face the public vote. The best film will then be chosen by an independent jury, which this year includes actors such as Mads Mikklsen and Axel Milberg. At a gala in Berlin's Admiralspalast, to which the best nine are invited, the winner will then be awarded prize money of 9,999 &euro;.

This year, Frankfurt filmmaker Ömer Sabry has also taken up the challenge. From January 26 at 10am to January 30 at 5pm, he and his team had time to get their entry into the can. They filmed at Frankfurt Airport and at the FSV stadium. The result is called "Baggage Claim" and is a stylish mini-thriller with an amusing final punchline. With atmospheric images of the airport, fast cuts, some action and a pinch of humor, this short film can convince all along the line. The competition is big, because it is impressive what some of the participants were able to produce in such a short time. But Ömer Sabry's contribution does not have to hide from the competition.

The 99FIRE-FILMS-AWARD is a really exciting project that promotes creativity and shows that even with simple means and in a short time very original, funny, surprising short films can be staged. We keep our fingers crossed for all participants, but especially for our Frankfurt boy Ömer Sabry and his team!

More info about the 99FIRE-FILMS-AWARD can also be found at: