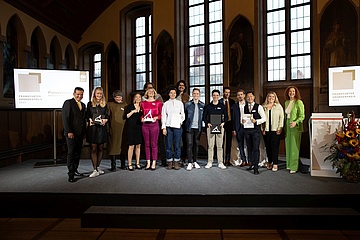 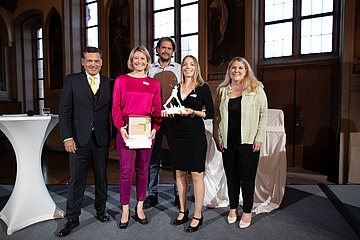 This week, the founding spirit and innovative strength were once again celebrated. In the festive ambience of the Kaisersaal in the Römer, the winners of the 22nd Frankfurt Founder Award were announced. The prize, for which almost 700 companies have applied so far, has been awarded since 2001.

Together with Oliver Schwebel, Managing Director of the Frankfurt Economic Development Agency, Head of the Department of Economic Affairs Stephanie Wüst presented the prizes worth a total of 30.000 euros to the lucky founders. Also this year, the jury was able to review and award the best business models from a total of 45 applications from a wide variety of fields.

The first prize this year went to the startup MentalStark. The psychologist and founder Sally Schulze and her team offer women fast and professional help with the topic of unfulfilled desire to have children and gynecology with a nationwide network. With the platform MentalStark women are offered among other things with on-line Community consisting of digital consultation, group courses as well as video and text contributions, which are based all on medical and psychological guidelines as well as by certified advisor inside and advisors approximately from the ranges psychology and medicine, fast and simple assistance. With MentalStark there is a solution for low-threshold access to psychological support on the topic of wanting a child. The MentalStark team now comprises twelve people who pursue a common goal: the sustainable improvement of women's health. The first place of the Frankfurt Founder Award 2022 is endowed with a prize money of 12,500 euros.

The second prize went to the company Werkules. The idea: to give craftsmen more time for their work on the construction site again. That is the goal of the three Werkules founders Kay Simon, Mario Simon and Alexander Fritsch. In this way, Werkules captures the spirit of the times and brings German crafts businesses into the future. Digitizing the entire business processes makes work easier for many craftsmen. Werkules was awarded second prize and prize money of 10,000 euros.

Third prize went to the Frankfurt-based startup OMC°C (Office for Micro Climate Cultivation), founded by Nicola Stattmann and Carlotta Ludwig. OMC°C is taking on the challenge of urban climate change and the consequences that come with it. In cooperation with the University of Kassel, the founders developed a research and development program for a greening system in urban areas and commercial properties. The modular system consists of lightweight poles with tensioned nets and provides habitat for fast-growing climbing plants where traditional greenery would otherwise have no place. OMC°C was awarded a prize of 7500 euros.

"A total of 691 companies have applied since 2001, when the award was established. More than 80 percent of the 78 award winners who have been honored so far are still successful in the market. This shows that the mix of business model and personality is one of the decisive factors for the selected companies to establish themselves on the market in the long term," says managing director Schwebel, summarizing the recipe for success of the Frankfurt Founders' Prize.

The recording of the award ceremony isavailable HERE on the YouTube channel of the Frankfurt Economic Development Corporation.