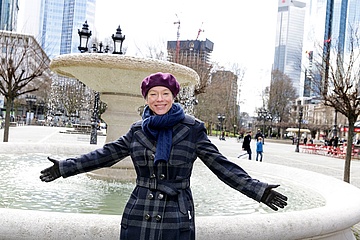 A sure sign that spring is here (or at least in the starting blocks, as this year) is the opening of the fountain season in Frankfurt. While the numerous fountains in the city lie quietly during the winter months, they are allowed to bubble happily again from spring onwards. And this is celebrated every year at a selected fountain. This year, the head of the Department of Culture, Ina Hartwig, rang in the fountain season last Thursday at the Alte Oper. The bowl fountains to the west and east of the Alte Oper, which are already bubbling, will be followed in the next few days by the other 150 fountains in the city.

"The fountains make a significant contribution to the urban flair of Frankfurt's Opernplatz. They are meeting points, places where people can linger, exchange ideas and - if necessary - cool off. I am very pleased that these little oases can be renovated and repaired step by step thanks to Frankfurt's fountain program and make our city even more livable," explains Head of the Department of Culture Hartwig. The two Old Bowl Fountains are part of the opera complex, which was built between 1873 and 1880 according to plans by the Berlin sculptor Richard Lucae. In the middle of the round basin made of Reinersreuther Edelgelb granite rests the fountain's namesake bowl on a column. Since 1983, copies of the opera fountains destroyed in World War II have flanked the building, completing the ensemble.

Last year, both fountains underwent extensive renovations after a year of disuse. In addition to a complete cleaning, pipes, filter systems, pumps and drains were replaced, and the basins were given a protective coating. The renovation measures were completed in August 2017. The total cost of the work is 35,000 euros.

Thanks to the well program established since 2007, an additional 100,000 euros is available in 2018 for urgently needed basic renovations that cannot be financed through the annual maintenance cost budget. With these funds, the nearby fountains, the Lucae fountain and the Marshall fountain, among others, have been extensively renovated in recent years. In the coming years, the reactivation of the Sindlinger Ranzenbrunnen, the renovation of the Märchenbrunnen, the fountain at the Museum Angewandte Kunst and other fountains are planned