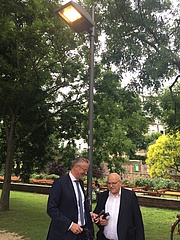 A lot has happened since the first oil lanterns lit up Frankfurt at night some 250 years ago. A majority of the streetlights operating in the city today are equipped with modern LED technology, offering high efficiency. But now the city is taking another step towards the future with a test. Starting today, 22 luminaires in the Wallanlagen will be transformed into Frankfurt's first public smart light pilot installation with the help of sensors. In the future, there will be a kind of "light on demand": The lamps will light up at nightfall in an energy-saving, reduced basic mode. Only when a pedestrian or cyclist passes by and needs more light will the lighting be increased. At the same time, the lamps communicate with each other, so that the next lamps already shine stronger.

Together with SRM Straßenbeleuchtung Rhein-Main, Mainova will carry out the test phase over the next few months. The control sensors that are now being installed represent only one possibility for this envisaged swarm communication. If the test is positive, the street lighting will gradually be converted to the new system. If it then runs nationwide, it would offer many other possibilities in addition to the potential savings. For example, it would be conceivable to provide a service for tourists, who would receive helpful information about their exact location, which would be determined via the respective lanterns, via a chip. Or an emergency button that could transmit the exact position of a person seeking help to the police or ambulance. But that is still pie in the sky, according to Klaus Oesterling, head of the traffic department. Because until a system like the Smart-Light system runs properly and without errors, it could take several years.

The Wallanlagen are very suitable for a test not only because it is still regularly frequented in the evening hours, but also because they are habitat for numerous animals. And these would be far less disturbed by the lighting, which is only intensified when necessary but otherwise dimmed, than is currently the case. In addition, the technology provides a more homogeneous light distribution, which increases safety for passers-by. The test phase will not only examine whether the system works technically, but also whether it delivers the desired benefits in terms of design, economy, ecology and health. The sample system, which is now being installed in the Wallanlagen, will allow various scenarios for economic viability and tests for technical feasibility to be tested in a real environment. After the results have been evaluated, a decision will then be made as to whether the smart light systems will be used on a larger scale in Frankfurt.