Frankfurt gets its own Bond film
from FFM Aktuell 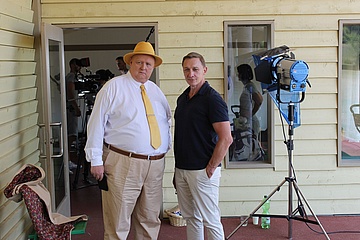 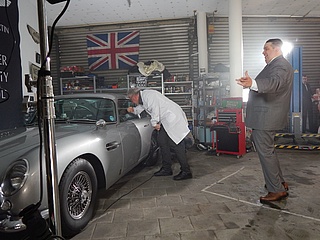 After there was a short film satire on casting shows with guest star Joachim Llambi for the 20th anniversary, Thomas Bäppler-Wolf wanted to take it up a notch for the 25th anniversary of his cult figure Bäppi La Belle. So it made sense for the self-confessed Bond fan to shoot a humorous homage to his favourite agent. When, during an excursion, he drove through a small town in Hesse that bears the name of Bond's nemesis Blofeld, the Bond short film was finally a done deal. But one idea led to the next and the planned 10 minute clip turned into a short film of about 40 minutes, which was shot in Frankfurt and the surrounding area in the past few days after intensive planning.

"Quite exhausting", Bäppi reveals to us on the fourth day of shooting - even if the production can't quite keep up with that of a real Bond film. For example, the Swiss Martin Langanke, who already stood in front of the camera as a Daniel Craig double in "Quantum of Solace" and will now also be seen in Frankfurt's "Bond", told us that scenes which only last a few minutes in the finished film are shot over weeks or even months. Bäppi's film, on the other hand, gets by with a total of five days - five days in which Valeriia Didovik and her team from Synergy Films got all the shots in the can despite tight schedules and midsummer temperatures, in which actors and guests stood in front of the camera with a lot of commitment and fun free of charge, and in which filming took place at locations provided free of charge, such as the Historical Museum, the Zum Rad apple wine pub in Seckbach or in the new Old Town.

The result celebrates on 06 November 2018 in the Kinopolis Sulzbach great premiere. Then the audience can expect on the screen a great fun, which not only pays tribute to James Bond, but also takes the genre in general affectionately on the grain. Bäppi not only wrote the script and directed the play, but also played several roles in front of the camera - including, of course, some of the popular characters from Bäppi La Belle's 25-year stage career. Alongside Martin Langanke, Alexander Beck, founder and director of the Alte Brücke Theatre, will be seen as the somewhat overambitious Agent 0014, who must solve a case of extreme urgency following the disappearance of his famous colleague. For the role of secret service chief M, Bäppi has been able to enlist none other than Frankfurt's former mayor Petra Roth. A real coup, which is only surpassed by the fact that the Aston Martin DB5 from the cult Bond "Goldfinger" also makes an appearance in the film.

After the premiere in November, "Specktre" will be shown in the Kinopolis cinemas in Hesse and the flick is also scheduled to run at short film festivals. And if all goes well, it won't stay with this one film. Already in 2019 it could come to the "return of the Bembel knights". And who knows what will follow? The possibilities are endless! Perhaps a costume drama - "Downton Bäppi"? Or Hessian eroticism with "Fifty Shades of Handkäs"? For now, we're looking forward to seeing 0014 in action - if it turns out to be anything like as amusing as the good mood during filming suggests, then the audience will definitely have a lot to laugh about!