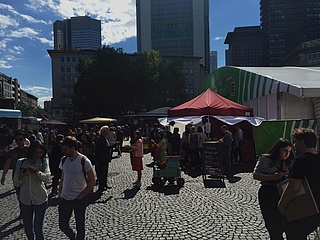 On Saturday it was finally time again: On the Roßmarkt in the Frankfurt city, the popular Green Sauce Festival started for the tenth time. It is well known that the Green Sauce has a very special place in the culinary Frankfurt. Even the heated discussions that always flare up about the supposedly correct preparation or the proportions of the seven herbs are simply part and parcel of Frankfurt. We love this delicacy, we argue about it - and for ten years now we have been celebrating it with a big festival. Initially, the event initiated by Maja Wolff (aka Anton Le Goff) and Torsten Müller was intended as a one-off event at the Brotfabrik. But when this one evening was so well received, it became a seven-day festival for the first time in 2009, the finale of which had to be moved to the Frischezentrum for capacity reasons. After this experiment could be booked as a complete success, the way of the festival into the city centre was obvious.

With support of city councillor Markus Frank the perfect venue was found with the Roßmarkt. But the big success did not come in the first years. In the meantime, however, the Grüne Soße Festival has become a permanent fixture in Frankfurt's cultural calendar and the evening events are often completely sold out shortly after the start of advance sales. In 2017, for the tenth time, the seven herbs will be prepared by seven restaurateurs over seven days - a proud anniversary that can be celebrated even if you couldn't get hold of tickets for the evening events. Because this year there will once again be a market around the festival tent from 11am to 8pm every day, with numerous stalls offering their delicacies - with the theme of the festival of course being the main focus here too.

So until 20 May, it's worth spending your lunch break or evening at the Roßmarkt, meeting up with friends here or simply feasting with relish as you pass by. Whether it's potato pancakes with green gravy, Argentine bratwurst, which you're welcome to spice up with homemade grits, or the very classic green gravy with potatoes and egg, anyone who loves the seven herbs in their only true combination - namely as gravy - simply can't miss this festival and its market. 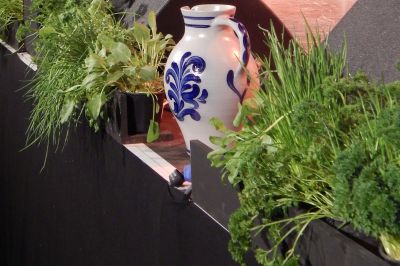