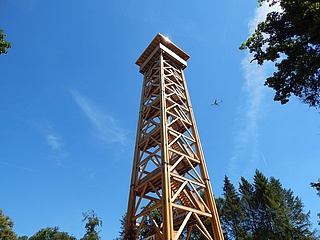 For decades, Frankfurt's Goetheturm has been one of the city's most popular landmarks. Many Frankfurt residents have known the tower since childhood, experienced their first kiss or even their marriage proposal here. Those who love the Goetheturm are used to bad news in recent years. First the wooden tower burned down completely, then the reconstruction was delayed and now we had to wait a long time to be able to climb the new tower again due to the Corona pandemic. But the latest news around the Goethe Tower could hit especially many in the heart.

Because the costs for the reconstruction turned out to be higher than previously planned, a solvent sponsor had to be brought on board now to be able to cover the additional costs. While the plan of the new sponsor, with entrance fees or the conversion of the adjacent playground into a small amusement park by the city of Frankfurt could be averted, a compromise had to be made to get the contracts under roof: The Goetheturm must be renamed. "We want to get rid of the tower's dusty image," said a spokesman for the company, which does not yet want to be named. "The popular excursion destination should also appeal to an international, modern audience, to make the tower in Sachsenhausen a world-renowned tourist destination." The plan is to have a panel of experts vote on the new name. Unlike the reconstruction, this time the citizens of Frankfurt will not be involved in the decision-making process.

"We already have some proposals we are flirting with," the company spokesman continues. As the popularity of the tower is to be increased on an international level, especially via social media, proposals such as "Frankfurt Insta-Tower" or "TikTokTurm" would be very highly traded. The city, on the other hand, would like proposals such as "Fraa Rauscher Turm" to do a little to ensure that the tower remains anchored in the region, even in its name.

A decision on the new name is expected to be made in the spring. At that time, it will also be announced which company has been secured as a sponsor. The name, which will be branded on the outside of the observation deck, will then be unveiled in a festive ceremony. We'll keep you posted, of course!