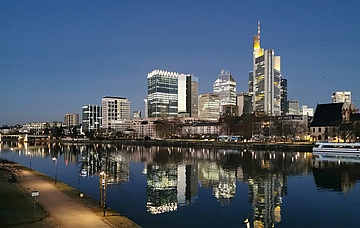 The skyline of Frankfurt is unique in Germany. It is a popular photo motif with tourists and locals alike. Frankfurt is also increasingly being used as a backdrop for cinema and television productions. No wonder, really, because the skyline of "Mainhattan" looks really impressive. But in just a few years this image will become even more impressive, because Frankfurt is constantly growing. Currently, no less than 50 new high-rise buildings are under construction or in the planning stage. There are large projects, such as the FOUR directly in the city, about which we had reported to you HERE. But there are also many projects that are not so present in the media and that do not arise so centrally. For all those who want to learn more about them, there is a highly recommended place to go: the SKYLINE ATLAS.

The information portal about Frankfurt's skyscrapers provides interested people with information, fascinating pictures and exciting articles about existing, under construction and planned skyscrapers in the Main metropolis. In addition to a comprehensive look at Frankfurt's city history and early skyscrapers, the portal also takes a look at the city's future. For this, the SKYLINE ATLAS has now come up with something very special: Frankfurt 3D!

To make it clear how the skyscrapers that are currently being built or, according to current planning, will be built in the coming years, will fit into the cityscape and thus also change the skyline, all skyscrapers were recorded three-dimensionally in months of work with the help of 3D specialists from Switzerland. Now the first 3D graphics have been published at https://www.skylineatlas.de/frankfurt-3d/, providing a view of the Frankfurt skyline in 2028 - once from the east, once from the west and once as an overall view. It becomes very clear where the city will change in the next few years - for example in the immediate inner city area as well as around the trade fair and in the new Europaviertel.

In addition to these panoramic images, which are to be followed by others, Frankfurt 3D will soon also be available as an interactive map. The highlight: With the Frankfurt 3D Map, the skyline can be explored by the users at a certain point in time in a three-dimensional map world. You want to know what Frankfurt will look like in three years? No problem with this interactive map. But it will not only be possible to look ahead. Later on, users will also be able to go back in time and view high-rise buildings that have already been demolished on the map. This will make the Frankfurt 3D Map a kind of time machine for every Frankfurt fan!

Whoever is interested in skyscrapers and urban development should definitely pay a visit to SKYLINE ATLAS, and especially Frankfurt 3D, and sign up for the newsletter to get access to the interactive map. More information can be found at: https://www.skylineatlas.de