Frankfurt is Germany's most livable city
from FFM Aktuell 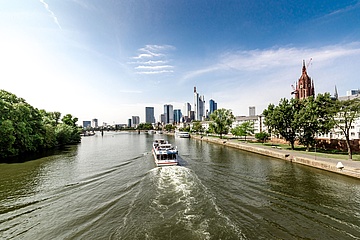 Year after year, The Economist chooses the world's most livable cities. Frankfurt made it to a very good 7th place among 172 cities in 2022, putting it in first place among German cities in the ranking. The list is compiled based on factors such as political stability, culture, environment, education and infrastructure. Last year, Frankfurt was far behind in 39th place under pandemic conditions.

This year, Vienna made it to first place, followed by Copenhagen and Zurich. The Canadian cities of Calgary and Vancouver take 4th and 5th place, followed by Geneva. And then comes our lovely Frankfurt. Toronto and Amsterdam made it to 8th and 9th place, while Japan's Osaka and Australia's Melbourne share 10th place.

"Frankfurt is a very livable city," comments Mayor Nargess Eskandari-Grünberg on the excellent performance in the ranking. "The city is versatile, it is a place where very different people can meet. In Frankfurt, more than half of the people can now tell migration stories. Diversity is not an exception here, but everyday life. Green sauce and baklava are on the same menu in Frankfurt."

Nevertheless, the city should not rest on its laurels as Germany's top city: "We always have to ask who the quality of life in Frankfurt is not so high for right now. The pressure on rents is a burden for many. There is also still everyday discrimination, which we must counteract not only in politics, but in the entire urban society. If Frankfurt has become equally accessible and livable for all, I am sure that we can also make it to No. 1 on the list."

Eskandari-Grünberg is particularly pleased that Frankfurt is almost on a par with its twin city Toronto. Next week, the mayor will travel to Toronto with a small delegation to exchange best practices of successful migration policies. The visit is sponsored by the EU and is to be made more permanent.