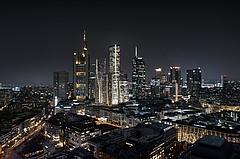 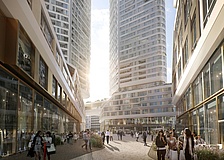 The Frankfurt skyline is unique in Germany. Not for nothing does it increasingly serve as a film backdrop and is an extremely popular photo motif with residents and guests of the city alike. However, the skyline will continue to change over the next few years as Frankfurt grows. In addition to numerous "smaller" construction projects, one building in particular will ensure that the Frankfurt skyline looks even more impressive in a few years. We are talking about FOUR, a complex consisting of four high-rise buildings, which is being built directly in the city centre on the former Deutsche Bank site. Yesterday, the major project entered a decisive phase: as part of a small and refined ceremony, which could be followed online via live stream, in the presence of Jürgen Groß, of Groß & Partner, Ben van Berkel, the Amsterdam architect from UNStudios and Frankfurt's city planning department head Mike Josef, the foundation stone for the FOUR was laid.

Deconstruction work on the site began exactly three years ago and lasted twelve months. The subsequent foundation work is expected to take until the end of May with the completion of the ground slab. In the future, people will live and work here. In addition, the FOUR will also be a meeting place for everyone, for example with a visitable roof terrace. In this way, the construction of the four towers should enable a diverse mix of uses, combining living, working and life in one place.

"There are two aspects that really move me today: We are breaking ground here today on the largest construction project in the history of our company, that's one thing. The other is: despite the pandemic situation, we have succeeded in celebrating today without any harm to the employees of all the companies involved. What else could I be but grateful and happy", remarks Jürgen Groß, visibly moved. Mike Josef, who has been familiar with the project from the very beginning as the city's head of planning, was also enthusiastic: "Today marks an important step in the history of the FOUR project, one in which I am very happy to be involved. To lay a foundation stone for four towers - that is unique in Frankfurt's city history."

Also architect Ben van Berkel is proud of the implementation of the plans, which resulted from a close working partnership of UNStudio and HPP Architekten: "With the FOUR, we are not only creating four new high-rise buildings in the middle of the city, but also opening up and revitalizing a completely new inner-city area. In this way, we are making a significant contribution to urban development."

As tradition demands, the three speakers together filled the time capsule with words to posterity, plans and sections of the FOUR, a €100 coin embossed with "Unity" and - in memory of current events - a FOUR mouth-nose mask. The time capsule will then be concreted into the floor slab below the tallest of the four towers. Once the floor slab is complete, structural engineering will begin at the FOUR. In the process, four towers will be raised almost simultaneously by GP Con under the direction of Roger Schmitt. Completion is scheduled for 2023/24.

You can also learn more about the FOUR Frankfurt at: https://www.4frankfurt.de/en/home/#the-new-skyline