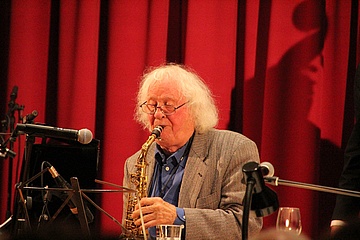 The city of Frankfurt has lost a very great citizen: jazz musician Emil Mangelsdorff is dead. Like no other, the Frankfurt-born musician shaped the jazz scene in the city, but also in the rest of Germany. There's no question about it: Emil Mangelsdorff helped write the country's jazz history. With his music, he has brought joy and inspiration to countless people and has extremely enriched the cultural life of Frankfurt.

"Emil Mangelsdorff was not only an outstanding musician, was not only groundbreaking for jazz and formative for his hometown Frankfurt - with him we also lose a contemporary witness of the Nazi era, who felt at first hand what it meant to resist the regime as an artist. We will continue to carry him and his wonderful jazz music in our hearts," honored him Lord Mayor Peter Feldmann.

Mayor Nargess Eskandari-Grünberg added: "As a person and as a musician, I will miss Emil Mangelsdorff very much. To stand up tirelessly for freedom, culture and diversity as a witness of the times was as great a concern to him as the music itself."

Emil Mangelsdorff was more than just a great jazz saxophonist, however. He was an upright democrat who had a lasting impact on cultural life in the city for decades. As a contemporary witness who was punished by the National Socialists in his youth for his commitment as a jazz musician, he reached countless young people for many years with his talk concerts, convincingly encouraging them to reflect on the Nazi era and sensitizing them to the importance of liberal and democratic basic values. Not only his music, but also this so important commitment will be missed!

Deeply affected culture and science department head Ina Hartwig: "Frankfurt loses a music legend. Together with his brother Albert, Emil Mangelsdorff shaped the German jazz landscape for decades. His passion for the African-American style of music, awakened at an early age, was based on a deeply rooted understanding of freedom. His very need for artistic development brought him into conflict with the National Socialist regime, which imposed severe repression on him, such as imprisonment and a wartime deployment to the Eastern Front. These experiences were so drastic for him that he wanted to tell young people about them. As a contemporary witness, he always reminded us that artistic freedom is an indispensable foundation of a pluralistic democratic society. Emil Mangelsdorff will be missed. My thoughts are with his family."

Despite his international artistic successes, Emil Mangelsdorff remained connected to his hometown of Frankfurt and contributed to Frankfurt's vibrant cultural life for decades with his diverse artistic work. Whether as a virtuoso musician, as a composer and bandleader, whether as an inspiring music teacher or a responsible contemporary witness, he left an outstanding mark on Frankfurt's urban society through his exemplary commitment.

The city of Frankfurt will always honor the memory of the deceased.