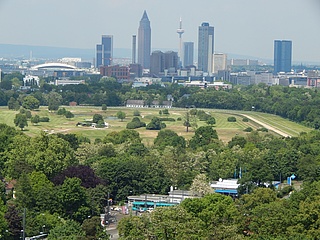 At the beginning of the new year, we provide an outlook on the exhibitions and events of Frankfurt's cultural landscape, festivals and sporting events. In the course of the year, there may be deviations or date changes.

(kus) Magritte, minimal art and music, homeland and paganism - with the new year, numerous new exhibitions start in Frankfurt's museums. Musically, 2017 is under the sign of Georg Philipp Telemann, the composer who also left his mark in Frankfurt died 250 years ago. Book lovers can look forward to "Frankfurt Reads a Book" and the Frankfurt Poetry Days.

At the very beginning of the year, from 27 January to 12 February, Frankfurt Positions invites you to concerts, lectures, theatre, exhibitions and performances at various cultural institutions under the title "Ich Reloaded - Das Subjekt im digitalen Zeitalter". The program also includes "Ed Atkins. Corpsing" at the MMK Museum für Moderne Kunst 1. From February 3 to May 14, the museum will be showing the British artist, who is considered a pioneer of a young generation of artists and whose text-based, performative, and installative video works depict general social developments.

The year begins surreally at the Schirn. With "Magritte. The Betrayal of Images," the Kunsthalle is showing an exhibition of 70 works by the Belgian surrealist from February 10 to June 5, including numerous masterpieces from international private and public collections. Magritte's curiosity, his relationship to the philosophy of his time, flowed into his works. Magritte did not see himself as an artist, but rather as a thinking person who let others share his thoughts through painting. The exhibition explores his quest for scientifically sound answers to life's questions.

In 2017, the MMK Museum für Moderne Kunst 2 is presenting its collected treasures of the Minimalism movement for the first time - in Germany, the museum's collection is unparalleled. The exhibition "Primary Structures. Masterpieces of Minimal Art" (22 February to 13 August) takes its visitors back to the USA of the 1960s, when artists such as Carl Andre, Walter De Maria, Dan Flavin, Donald Judd and Fred Sandback began to reduce their works to simple, uncluttered, mostly geometric basic forms and strive for objectivity, logic and industrial production without artistic signature.

"Odin, Thor and Freyja" makes a guest appearance at the Archaeological Museum from February 11 to June 6. With the special show, which is based on architectural stagings and displays a multitude of precious finds from aristocratic life as well as the cult of sacrifice and the gods, the house, together with the Danish National Museum Copenhagen, is shedding light on "Scandinavian cult sites of the 1st millennium AD and the Frankish Empire" and thus on ancient Norse paganism.

"Making Heimat. Germany, Arrival Country" is the title of the exhibition that the German Architecture Museum (DAM) realized last year for the German Pavilion at the Venice Biennale. From 4 March to 10 September, the DAM is bringing the exhibition into its own building. On two floors - updated with new thematic fields and supplemented by a documentary from Venice - it deals with the influx of refugees on Germany in 2015 and aims to provide impulses to reflect on Germany as an open immigration country.

The Städel combines with "Into the Third Dimension. Spatial Concepts from the Bauhaus to the Present" (15 February to 14 May) prints and drawings with sculptures. It is about form, volume, emptiness, structures, about how to represent the third dimension in a drawing, that is, two-dimensionally. Beginning with works by Bauhaus teacher L&aacute;zl&oacute; Moholy-Nagy, the Städel draws an arc to prints of Minimal Art, to spatial and light art, foldings and collages.

The Museum Angewandte Kunst is proclaiming "Picnic Time" from 6 May to 17 September and is devoting itself to open-air dining in all its facets. Photos, films and installations, utensils from crystal glass to plastic cups show picnic habits of different times and cultures. Events and installations in Metzlerparkt, which borders the museum, invite visitors outdoors - to picnic.

On May 6, during the Night of the Museums, visitors can meander through Frankfurt's exhibition buildings, take part in unusual guided tours, attend demonstrations, readings and workshops, they can eat, drink and party. A look behind the scenes of the independent art scene in the city is made possible by the Frankfurt Art Summer with exhibitions, open studios and many events from June to August. It kicks off on May 30 at the Kunstverein Familie Montez at Hafenpark.

Musically, 2017 is all about Georg Philipp Telemann. The composer died 250 years ago, and the cities in which he lived and worked - in addition to Frankfurt, including Magdeburg, Paris and the Polish city of Pszczyna - are organising a Telemann Year in his honour. From January to December, high-ranking concerts in the Alte Oper, the Nikolaikirche or the Kaisersaal, lectures and readings pay tribute to Telemann, who as a composer and music organizer led the local musical life of his time to its peak. For information on the program, visit www.telemann2017.eu .

Strolling through Bornheim in the 1920s with an illegitimate boy? Go: at "Frankfurt Reads a Book," which revolves around Herbert Heckmann's novel "Benjamin and His Fathers" from April 24 to May 7. Heckmann is regarded as a humorous melancholic, his book as a novel of time, pranksters and adventure. It was first published in 1962 and is to be republished for the reading festival. From June 22 to July 1, the Frankfurt Poetry Days will follow - every two years, alternating with LiteraTurm.

Frankfurt's festivals should not be missing from our annual preview either: From April 7 to May 1, the Dippemess will be celebrated at the festival square on Ratsweg. With Ferris wheel, bumper cars and everything that gets the adrenaline pumping. From June 3 to 6, Wäldchestag turns the city forest into a fairground, and from June 28 to July 7, the Opernplatzfest invites visitors to enjoy culinary delights and music.

The Frankfurt sports year begins with the Davis Cup - the German team plays its first-round match against the team from Belgium from February 3 to 5 at the Fraport Arena. The German Shooters' Day is held in Frankfurt from 27 to 30 April, with the great Schützenzapfenstreich taking place on Römerberg in the late evening of 28 April, followed by a procession of participants from the Alte Oper to Römerberg the following day. May traditionally begins in Frankfurt with the cycling race "Rund um den Finanzplatz Eschborn-Frankfurt" (Around the Financial Centre Eschborn-Frankfurt), on 24 May the 8th Frankfurt Rowing Festival starts on the banks of the River Main and on 13 June thousands of runners meet for the J.P. Morgan Run through the streets of the city centre