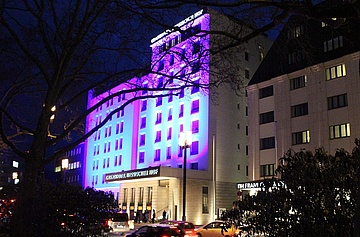 There are places that somehow just belong to Frankfurt - even if you only know them from driving by. The luxury Hessischer Hof hotel is one such place. It is not necessarily the rather inconspicuous facade, but the good reputation that distinguishes this hotel, which belongs to the Prinz von Hessen group of companies. Especially among trade fair guests, the 121 rooms and suites were extremely sought after and the adjoining Jimmy's Bar was a popular meeting place, especially after long trade fair days. This is now over.

Losses in sales due to the Corona pandemic, from which the hotel will not recover in the coming months due to the cancellation of upcoming trade fairs, as well as a realignment of the group of companies are the reasons for the closure of the renowned house, which is targeted for the fourth quarter of 2020. For 63 employees, this means dismissal. This means that around 20 percent of the workforce in the Prinz von Hessen group of companies will have to leave. For Donatus Landgrave of Hesse, a difficult but important step to maneuver the group of companies through these difficult times.

The five-star hotel, Frankfurt's only privately run luxury hotel since 1952, was lavishly renovated just a few years ago. Whether the restaurant S&egrave;vres, which is listed in the Gault Millau Guide with 13 points, the SOKAI Spa Lounge or the special ambience of the hotel, which successfully combines tradition and modernity (which reflects the character of the Main metropolis very well) - until recently, the house was one of the top addresses when it came to luxurious hospitality in Frankfurt. This closure is a real loss for the Frankfurt hotel scene.