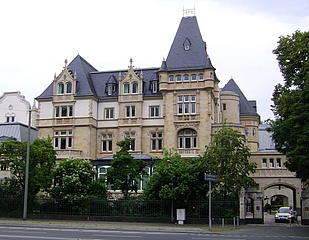 After the Hessischer Hof, which closed its doors for good at the end of 2020, Frankfurt is now losing another luxury hotel: Villa Kennedy, which opened in 2006, will say goodbye to its last guests at the end of March and then close for good on April 1. The 5-star hotel, which belongs to the British Rocco Forte Group and was converted at the time for over 70 million euros, is to be converted by the new owner into a luxury residential complex for well-heeled senior citizens.

The listed Villa Speyer, which for a long time housed the Max Planck Institute for Biophysics, had been sold in the early 2000s and converted into a hotel. In the more than 160 rooms - including a spacious presidential suite with bulletproof glass windows and panic room - national and international celebrities from the worlds of politics, music, sport and film have been guests time and again since the opening, and they have paid a lot for a stay in the noble house - up to €6,000 per night, depending on the room category. Also the catering trade and the Spa range underlined the exclusivity of the house at the Kennedyallee.

Doch after approximately 16 years is now conclusion. The employees of the hotel are to be offered new jobs in other houses of the Rocco Forte Group.