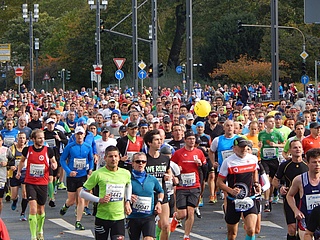 Hopes were high that it would remain a one-off cancellation. But now it is a certainty: the Frankfurt Marathon will not be able to take place in 2021 either. A sporting event of this magnitude, with many thousands of participants, as well as numerous onlookers along the course celebrating and cheering on the runners, is not feasible in view of the pandemic. Therefore, the organiser motion events, in agreement with the City of Frankfurt, has decided to cancel the Mainova Frankfurt Marathon 2021 planned for 31 October. This difficult step for all parties involved was unavoidable, as the staging of a world-class event requires secure preparation and planning, which is not possible for the organizer under the given circumstances.

Racing Director Jo Schindler says of the renewed cancellation, "In the current situation, the event is not calculable for us, because currently no one knows what the legal situation will be on the day of the event. But we would need a clear planning basis at the latest now, less than three months before the race weekend. After all, a major event with as many facets as our Mainova Frankfurt Marathon cannot be implemented in just a few weeks. Despite a comprehensive hygiene and safety concept and a preliminary official permit, there is no guarantee that the event will not have to be cancelled at short notice, which would jeopardise the continued existence of Germany's oldest city marathon. Our participants as well as our partners and we as organizers need planning security, which is currently not given. We have thought about it for a long time, looked for possibilities and wrestled with ourselves, but unfortunately we don't see any chance of hosting Frankfurt's biggest street festival this year either. As an athlete and long-time organizer, my heart bleeds, but we have to make a rational decision based on the given situation and that is why we are now pulling the ripcord."

The Mainova Frankfurt Marathon brings more than 25,000 runners to the streets of Frankfurt every year, plus accompanying persons and spectators. Runners from all over the world travel every year especially to participate in the event. Since motion events took over the organisation of the Mainova Frankfurt Marathon in 2002, the event has succeeded in establishing itself as a top international event. The participants especially appreciate and praise the great organisation of the race weekend. "The quality of the event is of high importance for us and the participants*. Unfortunately, we are hardly able to ensure this quality under pandemic conditions at the moment," explains Schindler.

In addition to the main competition, the marathon, the other competitions - relay marathon, mini marathon and Struwwelpeter run, as well as the supporting programme - have also been cancelled. The participants have already been contacted and comprehensively informed about the cancellation and the consequences. Primarily, participants will be offered a voucher as part of the reversal of the event, as was the case with last year's cancellation. This can be used to register for the Mainova Frankfurt Marathon in 2022 and 2023.

Markus Frank, City Councillor and Head of the Sports Department of the City of Frankfurt, says: "The Mainova Frankfurt Marathon is one of our central major events in the sports city of Frankfurt. Germany's oldest city marathon has long been an institution in both elite and popular sports and attracts thousands of athletes to the sports city of Frankfurt am Main every year. I have great respect for the decision of the organisers to cancel the marathon again in 2021 at such an early stage. This cancellation hits us very hard. An adapted race with distance rules and much more is not nearly the rousing event we have known and appreciated for decades in Frankfurt am Main. That is why we are looking forward together and hope for a good restart in 2022."

The organizer is now planning the restart in 2022. Preparations for October 30, 2022 have already begun. When the starting gun then goes off at 10 a.m. for the 39th edition of Germany's oldest city marathon, thousands of top and amateur athletes will once again be sent on their way through Frankfurt to the cheers of spectators. "We are confident that the Corona pandemic will allow events on the scale of the Mainova Frankfurt Marathon to take place again next year," says race director Schindler. "My team and I are really looking forward to the big reunion celebration at the Mainova Frankfurt Marathon in 2022. After two years without the running classic on the Main, it's about time that runners* finally fill Frankfurt's streets again on the last weekend in October."