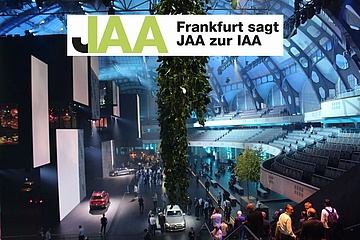 The International Motor Show (IAA) has been struggling, and not just since last year, when the fair was accompanied by massive protests from climate activists. Fewer and fewer exhibitors came to Frankfurt to present new models, concepts and ideas. Nevertheless, not only those responsible at Messe Frankfurt are certain: the IAA belongs to Frankfurt! At the end of January, after many decades, Frankfurt must once again apply to remain the IAA city. No easy task, after all there are numerous competitors. In order to make the Main metropolis look particularly good, the supporter campaign "JAA to the IAA in Frankfurt" has now been launched.

Immediately, Dr. Stefan Schulte, CEO of airport operator Fraport AG, Dr. Constantin Alsheimer, CEO of Frankfurt-based energy supplier Mainova, and Prof. Knut Ringat, Managing Director and Spokesman for the Executive Board of the Rhine-Main Transport Association, pledged their support for the declaration and thus for Frankfurt as a location. But also the actress Radost Bokel, the director of the Kempinski Hotel Frankfurt, Karina Ansos or apple wine and fruit juice press association chairman Martin Heil are among the supporters. They all agree: Frankfurt will continue to be the ideal IAA location in the future. Because the city can do mobility, can do intermodality, and it thinks and lives sustainably a sensible interlinking of modes of transport - all demands that the VDA places on the IAA of the future.

It is clear from the statements that the IAA is not only part of the local identity of the Main metropolis, but that it meets the best conditions for the new orientation it is striving for because of the attitude of the city and the region. "You won't find more professionalism anywhere, this is where mobility is lived in many ways every day," notes JÃ¶rg Schaub, Managing Director of Wirtschaftsinitiative FrankfurtRheinMain e. V. For Maja Wolff and Torsten MÃ¼ller, initiators of the Green Sauce Festival, it's clear: "Mobility means innovation, change and diversity - where better than in Frankfurt?" For actress Radost Bokel it is also clear: "Frankfurt is way ahead in terms of mobility. From me a very clear JAA to the IAA in Frankfurt! Where else, please?"

In addition to Frankfurt am Main, the cities of Berlin, Stuttgart, Cologne, Hanover, Hamburg and Munich are also competing. On January 23 and 24, the applicant cities will present their concepts to the VDA in Berlin. Frankfurt's IAA team is headed by Markus Frank, head of the city's economic affairs department: "We are working with full commitment and great passion and will present an outstanding bid." The focus is on the fact that the IAA, as a showcase and future trade fair for modern mobility, has ideal prerequisites for hosting the event. But there are also other important points in Frankfurt's favour:

Frankfurt is a hub for global air traffic.

Frankfurt is a hub for rail traffic.

Frankfurt is the hub of automotive traffic.

Frankfurt and the FrankfurtRhineMain metropolitan region are thus the European mobility hub.

The "Frankfurt Mobility Message" states, among other things: "Who, if not we in the metropolitan region, know that mobility must be completely rethought. That it definitely needs a revolution. Let's join forces to make the city, where Paulskirche stands proudly in the middle of the centre as the seat of Germany's first parliament, a symbol for new mobility and democratic dialogue about it."

The IAA 2019 has made it clear that the industry and the trade fair need a change. If Frankfurt succeeds in making it clear in its bid that it is also possible to establish a completely new concept at its traditional location, the chances may not be so bad that the IAA will remain in Frankfurt in the future. We are curious to see what the VDA will decide after the applications.

Read more about the campaign at: www.frankfurt-sagt-jaa.de