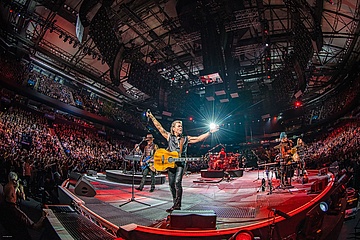 With a Corona-related, two-year delay, Peter Maffay and band will receive the Frankfurt Music Prize 2022. The prestigious award is presented annually to personalities who have made a special contribution to the national and international music scene. The award ceremony will take place on April 29 in Frankfurt's Paulskirche.

As a 21-year-old, Peter Maffay landed his first million-seller with the song "Du," written by Michael Kunze. Despite the overwhelming success, Maffay did not remain true to the genre of "sophisticated pop songs". On the contrary. The artist, who comes from the Romanian Braşov and has lived in Germany since the age of 14, advanced in his career to become a thoroughbred musician who transcends stylistic boundaries: his repertoire includes ballads just as convincingly as hard rock, country, folk, world music and - as he proved with his invention, the dragon "Tabaluga" - music for the very young. In addition, Maffay is one of the founding fathers of the successful model "German-language pop music".

Peter Maffay and band - the German number one

His impressive record includes 21 number one albums, well over 50 million records sold and several, always sold out tours. A great contribution to this success story, unique in Germany, was made by his fellow musicians - the Peter Maffay Band, consisting of seven virtuosos. A band like a family. Several members of this excellent ensemble have been part of the line-up for up to four decades. Artistic plus: The human as well as artistic familiarity guarantees blind musical understanding among the musicians - which can be experienced in every single Peter Maffay concert.

These outstanding musical qualities coupled with great joy in playing plus the artistic and content curiosity lived by band leader Peter Maffay convinced the Board of Trustees of the Frankfurt Music Prize already two years ago. However, due to Corona, the award ceremony of the Frankfurt Music Prize had to be cancelled in 2020. Now the time has come: on April 29, 2022, the award ceremony will take place at 7 p.m. in the Paulskirche. Admission is from 6 pm. Peter Maffay and his complete band will be there: Bertram Engel (drums), Carl Carlton (guitar), Peter Keller (guitar), JB Meijers (div. instruments), Ken Taylor (bass) and Pascal Kravetz (Keyb.).

About the Frankfurt Music Prize:

The most recent winner of the 2019 Frankfurt Music Prize was the Bundesjazzorchester (BuJazzO).

The Board of Trustees of the Frankfurt Music Prize Foundation consists of:

the Lord Mayor of the City of Frankfurt

the Chairman of the Federal Association of German Musical Instrument Manufacturers e. V.

one managing director of Messe Frankfurt

two representatives from the German Music Council and