Frankfurt Music Fair will not continue
from FFM Aktuell 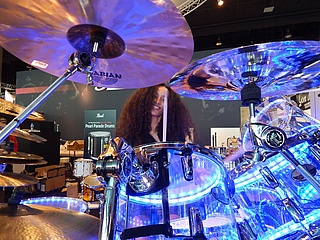 Like so many companies, Messe Frankfurt has suffered greatly from the Corona pandemic. Due to the cancellation of many important trade fairs in the past two years, a lot of sales have been lost, which will also have consequences for the future. In order to be able to return to the growth path as quickly as possible, the Messe Frankfurt management has decided to concentrate from now on exclusively on those events that guarantee profit. The music fair in its previous form is unfortunately not one of them.

The market structure has changed in such a way that no economic perspective can be expected for the Musikmesse, which was based in Frankfurt for around 40 years: "The market concentration in the instrument trade, with over 70% of the market distributed among a few online dealers in Germany and neighboring countries alone, is changing the market and ordering behavior considerably. It is not economically feasible to hold a trade fair against this background. Part of our long-term strategy around the Musikmesse was and is to focus even more intensively on content for the general public away from the musical instrument trade and to celebrate a festival of music in Frankfurt together with people from all parts of the world. We see a perspective for the future again for such formats as the Musikmesse Festival and the Musikmesse Plaza within the framework of a new concept.", says Stephan Kurzawski, Member of the Board of Management of Messe Frankfurt

The focus in the future will be on attractive offers for the general public, which awaken the desire for music and entertainment, bring people together at top-class concert events and make the cultural diversity of the Frankfurt region emotionally tangible.

"Our grounds are developed in such a way that we can also host two or more events simultaneously if required. Starting with Prolight + Sound, Messe Frankfurt has 135 trade fairs, congresses and concerts scheduled for 2022 in Frankfurt alone," adds Uwe Behm, managing director of Messe Frankfurt.

With the decisions on portfolio adjustments as well as the realignment of, for example, the company's media services - combined with a significantly expanded digital offering - Messe Frankfurt can focus entirely on its profitable revenue generators. It will accelerate the marketing of its digital offerings, attract new guest events to Frankfurt and dedicate itself to the future topics of sustainability and digitization.