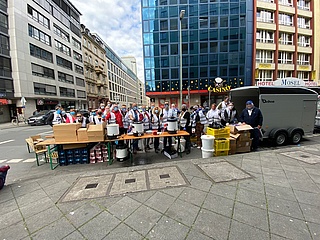 Yesterday, Sunday, the organizers of the Frankfurt Oktoberfest got together with some supporters to distribute weisswurst and pretzels to those in need in the Bahnhofsviertel. Dennis and Patrick Hausmann from the Hausmann festival family and Kai Mann from the event and marketing agency No Limit teamed up with Streetangel e. V. for this campaign. "The voluntary and dedicated work of Streetangel under the motto &sbquo;Helping where others look the other way' impresses us very much", explains Dennis Hausmann. "With our campaign, we want to support the efforts of the association and offer homeless people a little moment of enjoyment and a bit of that Frankfurt Oktoberfest feeling in these particularly difficult times for them. Homeless people and others in need belong to us here in Frankfurt just like any other citizen, any other citizen."

About 1,500 pairs of Weißwürste (white sausages), 800 pretzels, and just as many bottles of mineral water and Coke were on hand Sunday afternoon. As a sweet addition, there were also roasted almonds. Partners of the action were beside the festival family Hausmann and No Limit the Fleischwerke E. Zimmermann GmbH & Co. KG, the Frankfurter Bäckerei Huck GmbH, the M. Eiserloh Süße Mandelbar, Selters Mineralquelle Augusta Victoria GmbH and The Coca Cola Company.

Streetangel has been involved in helping Frankfurt's homeless and needy for six years. The non-profit association distributes food several times a week in homeless shelters and overnight accommodations, collects and distributes clothing, toys and hygiene items, and organizes gift drives at Christmas.