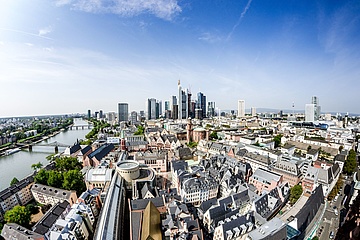 Currently we are shimmying from opening step to opening step. Some things are back after a long lockdown hiatus, more will hopefully be back very soon. Of course, the infection events remain unpredictable. But all indications are that we are out of the woods. Therefore, one can now already dare a cautiously optimistic look into the future, although some important questions arise as to how it should continue after the pandemic.

And so Lord Mayor Peter Feldmann, with the involvement of the Health Department, discussed with representatives of politics and associations at a special meeting of the Round Table City and District Marketing about questions such as: What support do trade and industry need on the way back to normality? And what is the long-term perspective? Invited to this discussion was the City and District Management Department in the Main Office and City Marketing.

"Frankfurt is looking forward," said host Feldmann at the start. "And the city is not letting the economy down. The Frankfurt Plan bundles our short-term recovery measures, from simplified permits for outdoor gastronomy to vacancy management and targeted advertising measures. Here we want to and will also draw inspiration from our partner cities. In addition, there is a 30 million euro investment program that brackets these short-term measures and the long-term repositioning of the city center."

The key elements of the Frankfurt Plan

Despite the cancellation of Museumsuferfest, Lichterfest or Bahnhofsviertelacht: The Mainfest, the Herbst-Dippemess and the Christmas Market are to take place this year. The Christmas market is even planned to be extended by a week. Under the working title "Summer in the City", a new edition of last year's autumn market ("Herbst in der Stadt") is being considered. The Green Sauce Festival will be expanded - as Green Sauce Festival with a large stage program for young and old, with partners from the culture and sophisticated hygiene concept (we had reported to you HERE).

As part of the planned campaign, purchases from participating tradespeople will be rewarded with a stamp on a voucher card. This then becomes a raffle ticket - attractive prizes await, for example annual Museum Embankment tickets and hotel stays. As a start date August is targeted, the duration of the action should be three months.

Getting to know your hometown as a tourist - idea behind "Guest in your own town". As part of the campaign (usually takes place around Christmas), Frankfurt residents can check into hotels at a special price. The tried-and-tested format is to be offered additionally on two weekends in the summer holidays in 2021 as an exception.

Placement of green rooms and additional seating in the city center. More attractive alternatives should be sought for the concrete terror barriers.

The City of Frankfort already meets all technical requirements to connect to the Luca app for tracking care provided by the state. The activation is about to be released.

A supplementary study to the Tourism 2030 Master Plan is to be commissioned. Topic: Possibilities of an active inner city development.

Two campaigns are to accompany the new start in Frankfurt City - "Mainviertel" and "Frankfurt REStart". The umbrella association of trade associations and the business development agency are in charge of these campaigns, in cooperation with the city management in each case. Night shopping" campaign days and pop-up stores in selected retail areas are also planned. Other measures under consideration include a public transport discount campaign on selected days, possibly supplemented by free parking hours for motorists.

Already decided is the extension of outdoor dining exemptions through the end of the year.

In the further debate, suggestions from partner cities should also flow. In Tel Aviv, for example, the "1000 Chairs" campaign caused a sensation. Seating, parasols and tables transformed parks and public squares into leisure oases, while the seating also extended the outdoor space of restaurants and shops. In Birmingham, a music pavilion was built in the city center, which is available for events throughout the summer.

These and other suggestions will be evaluated for their transferability in the near future.

What is important for Frankfurt now is the creation of a short-term and medium-term concept for the city centre: a modern sustainable traffic concept plus usage concepts for the changing city centre. What is important here is a change in awareness on the part of all the decision-makers and those with reservations in the background: the city must be developed. It no longer lives by itself. Above all, bureaucratic obstacles to new ideas must be dismantled and replaced by pragmatic solutions. Only in this way, for example, can vacancies in the city centre be creatively played with.