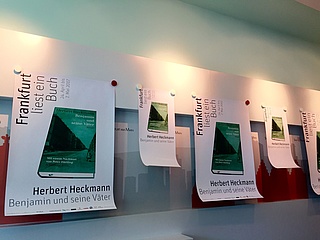 The reading festival "Frankfurt reads a book" celebrates its eighth birthday! Since 2010, the non-profit association "Frankfurt liest ein Buch e.V." has made it its goal to entice the entire city to read a specific book that everyone knows or should know. This should bring selected authors and books into the collective consciousness and also make out-of-print books accessible again. Young and old should read, listen and discuss together. The success of the past editions of the reading festival has shown how well such a project is received by the people of Frankfurt: over 80,000 visitors were counted at the approximately 640 events held in the first seven years. In 2017, with the help of grants from the city and sponsors, the organizers have once again been able to put together an incredibly diverse and attractive program that perfectly underscores the very special status of this project.

This year, the focus of "Frankfurt Reads a Book" is Herbert Heckmann's novel "Benjamin and His Fathers", a book that describes 1920s Frankfurt - particularly Berger Strasse with its inns, caf&eacute;s, shops and backyards, from the perspective of a child. Many older Frankfurtians are of course familiar with the book, which has been reissued by Schöffling & Co. But with the help of the numerous great events, chances are good that "Frankfurt liest ein Buch" will also get young readers excited about this beautiful book. After all, there are numerous offers among the more than 90 events that could appeal to a cross-generational audience. In general, a look at the programme shows that the individual organisers have displayed tremendous creativity in bringing culture closer to their visitors in an entertaining, exciting and surprising way. It is already clear that this edition of "Frankfurt liest ein Buch" will be extremely exciting and varied.

Whether in bookstores, libraries, Caf&eacute;s, in the Holzhausenschlösschen, in the Deutsches Filmmuseum or even in four private homes - from 24 April to 07 May this one book will be read all over Frankfurt. And not only in Frankfurt! In 2017, events in Bad Vilbel, where Heckmann died in 1999, Oberursel, Bad Soden, Offenbach and Gießen are also included. This makes it clear that the importance of the reading festival has increased significantly not only for Frankfurt, but for the entire region. It is all the more gratifying that the association's commitment was recognized in 2016 with the BKM Prize for Cultural Education from the Federal Government for Culture and the Media. For the 2017 edition of the reading festival, there is the support of prominent guests, including patron Lord Mayor Peter Feldmann, former Lord Mayor Petra Roth, Thomas Bäppler-Wolf, Jo van Nelsen, the young musician Fee, actor Dietmar Bär or even Wolfram Koch, commissioner of the Frankfurt TATORT team, but of course also of many volunteers and private individuals, without whom the effort involved in the many events would not be possible at all.

It is also very nice in 2017 that again some schools could be persuaded to participate in the project. After all, a project like "Frankfurt reads a book" wants to contribute to ensuring the cultural future of the city and thus also of the coming generations. And it would be more than desirable if those responsible would break away from their strict curricula and encourage their students to creatively participate in such a cultural event. Therefore, the students and teachers who participate with very special projects deserve special praise for their participation this year and for their creative examination of the themes from "Benjamin and his Fathers", which are still very relevant for children today.

The colorful program, the ingenuity of the organizers and the high popularity of the visitors suggest that "Frankfurt liest ein Buch" will be a complete success again in 2017 and will not be held for the last time this year.

<link http: www.frankfurt-liest-ein-buch.de _blank>The complete program, information about the venues and all other info can be found HERE

Benjamin Weis sees the light of day in Frankfurt in 1919 as the son of Anna, an unmarried law office assistant, with no trace of his father. The lawyer Fritz Bernoulli takes care of the young family, provides housing and maintenance. Thus, despite the adverse circumstances, Benjamin grows up sheltered in Bergerstraße. He immerses himself in the world of Don Quixote and Robinson Crusoe and experiences small and great adventures with his friends. But since his mother evasively answers his questions about his father with fairy tales, Benjamin has to invent new fathers for himself.

Herbert Heckmann draws a panorama of the twenties and thirties in Germany from the perspective of a child who cannot make sense of many things. Why his foster father is called a traitor to the fatherland, why no one intervenes when an alleged communist is beaten up in the street, why his Jewish friend has to emigrate to America, the teenage Benjamin still gets no answers to these questions. And so his conclusion is, "I shit on all the fathers who got us into this kind of life."

<link https: www.amazon.de dp ref="as_sl_pc_tf_til?tag=frankfurt-tip-21&amp;linkCode=w00&amp;linkId=&amp;creativeASIN=3895614823" _blank>.You can order the book HERE, or better yet, purchase it at one of the Frankfurt bookstores! 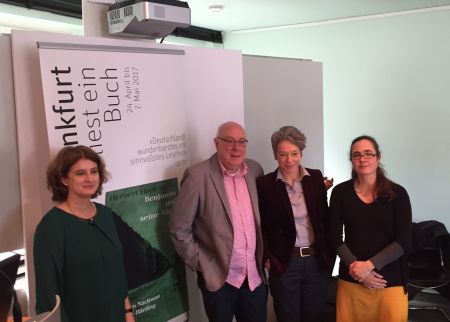