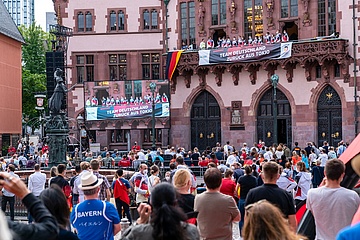 The athletes at the 2020 Summer Olympics in Tokyo had to largely do without cheers from the audience. The German top athletes were able to get a little bit of it today on Frankfurt's Römerberg. For despite the pandemic and the accompanying restrictions, the beautiful Frankfurt tradition of ceremoniously welcoming teams returning home from top international sporting events to Römerberg after landing at the airport was also celebrated after these somewhat different Olympic Games. Today, Monday 9 August, Lord Mayor Peter Feldmann welcomed the German athletes returning from Tokyo. Alfons Hörmann, President of the German Olympic Sports Confederation (DOSB), also took part in the ceremony.

The city welcomed the guests in the Kaisersaal. In addition, it gave sports enthusiasts on the Römerberg the opportunity to follow the celebration in the Römer Town Hall on a video screen and to experience the athletes live. These presented themselves on the balcony under moderation of the sport journalist Jens Zimmermann pandemic in small groups and answered his questions. Mayor Feldmann welcomed the homecomers in the town hall and the fans in the open air with separate speeches. Of course, special rules applied here as well: Anyone who wanted to take part in the celebration on the Römerberg had to register in advance and present a negative Corona test. The number of fans was limited due to the Corona measures.

This did not detract from the good mood. To the cheers of the fans, the OB greeted the team with a heartfelt, "Frankfurt says 'thank you' to you on behalf of Germany!" The medal winners signed the Golden Book of the city. The DOSB team won ten gold, eleven silver and 16 bronze medals. This puts them in 9th place in the medal table. Although this means a worse result than at previous Games, Feldmann said: "The result is impressive". At the same time, he stressed the exemplary role of the athletes: "With their performances, they represent our country and our values."

In 17 days, 434 German athletes from 33 sports gave their all in 339 competitions to achieve the goal of an Olympic medal. 92 of them were among the guests. The gymnast Lukas Dauser, the rowers Jason Osborne and Jonathan Rommelmann, the wrestler Aline Rotter-Focken, the walker Jonathan Hilbert and the canoeists Max Hoff and Jacob Schopf, who all won a medal in Tokyo, were among those who answered questions from presenter Zimmermann on the Römerbalkon.

In his speech, the Lord Mayor emphasized the difficult circumstances in which the competitions took place due to the Corona pandemic. Athletes were strictly isolated and could not move freely as is the case at other Olympic Games. Contacts with participants from other nations and visitors from competitions of other disciplines - otherwise a classic part of the sports festival - did not take place. In addition, the stands in the arenas had to remain empty. "At the same time, it is the spectators who make the sport special," regretted the head of the city.

Frankfurt is "center of German sports"

In his speech, the Lord Mayor highlighted the close connection between top-level and club sports. After all, success only comes from breadth, as the Olympic disciplines are amateur sports. "I would like to thank all sports associations, clubs and volunteers for their work. Without them, the successes at international level would not be possible," Feldmann said.

The Lord Mayor called Frankfurt the "centre of German sport". In addition to top associations and clubs in the city, the sports infrastructure contributed to this. This is oriented towards the goal of a basic supply close to home. In this development, the city stands by the side of the 430 sports clubs and supports the increasing demand for unorganized offers.