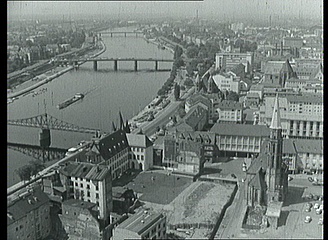 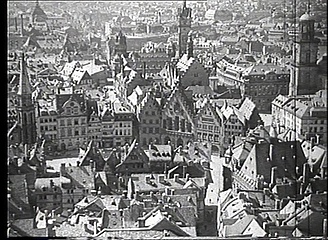 Frankfurt's city history is actually always an exciting topic, but with the construction and imminent completion of the new DomRömer area, the interest in insights into old Frankfurt has once again increased significantly. So the new DVD in the "Rediscovered" series comes just at the right time. In cooperation with the Institution for Urban History, filmwerte GmbH has compiled a series of historical film treasures from 1909 to 1959.

The DVD series, which began in 2008 with "Potsdam Rediscovered", strives to show multi-layered views of the cities portrayed and their inhabitants through the ages. The viewers are to be enabled to get a somewhat different view of their own city by means of the historical film contributions and contemporary witness reports. After Potsdam, Leipzig, Lübeck, Munich and Nuremberg, Frankfurt is now being "rediscovered". The DVD offers about 90 minutes of various film contributions, beginning with pictures of the flood of 1909, followed by a wonderful contribution from the series "new building in Frankfurt", in which first the disadvantages of conventional kitchens are demonstrated, before the advantages of the Frankfurt kitchen designed by the Viennese architect Margarete Schütte-Lihotzky are presented. From the same series comes the contribution about the "Frankfurt micro-apartment" from 1928, in which it is shown that great family happiness is possible even in the smallest of spaces.

Absolutely worth seeing is the 15-minute film "Frankfurt am Main, the city of yesterday and today". The film is worth seeing not only because of the shots that show how the area around the SCHIRN or at the Eschenheimer Turm, for example, has changed over the decades, but also because the concept of the city between tradition and modernity is still cultivated today. The Ufa cultural film "Besuch in Frankfurt am Main" (Visit to Frankfurt on the Main) from 1936 then also shows that the people of Frankfurt already had their very own charm and special sense of humour more than 70 years ago.

Absolutely worth seeing, albeit with a queasy feeling in the stomach area, is the panoramic view from the cathedral tower filmed by tourists in 1948, which shows the old town lying in ruins. These shots show what was achieved here during the reconstruction, which only a few years later, as can be seen in "Our Frankfurt Today" from 1954, made large parts of the city shine in new splendour. This film is extremely worth seeing in many respects. On the one hand, it shows the discrepancy between a modern city in a spirit of optimism and a city still scarred by the consequences of war. On the other hand, it deals with problems like overcrowded classrooms and a lack of teachers, which our society has to deal with again today.

Amusing, however, is when the advantages of crèches and kindergartens are touted here. There, "Mommy can rest easy, it's almost as nice as home." Then a group of children are shown potty training, punctuated with the comment, "When it comes to the future of the little ones, there's always a peaceful meeting in City Hall, too." From today's perspective, it's also amusing to see that the Römerberg was still used as a parking lot back then.

Finally, viewers still get to explore the city with art student Ursula in 1959. The promotional film accompanies the girl for 20 minutes through her everyday life, on her first visit to the zoo, when she moves into her student flat and then later in her job as a tour guide.

The film contributions gathered here are truly historical film treasures. Interesting, charming, but also humorous, viewers can embark here on a journey through time full of surprises. Surprising, for example, is the fact that there are still corners that have hardly or not at all changed, while other places are almost unrecognizable. The Hauptwache, for example, where trams once ran, the area around the main railway station, which almost seemed magnificent, or the magnificent Schauspielhaus, which has long since disappeared - these and many other, partly previously unpublished photographs - ensure that it is really exciting to rediscover the old Frankfurt in this way. 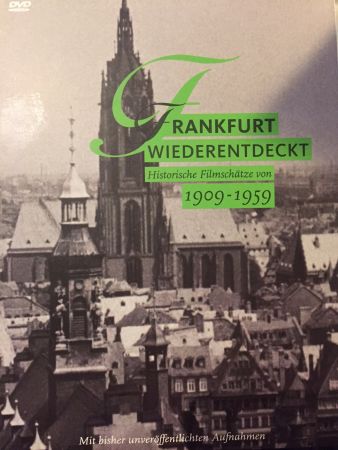 You can download the DVD via www.historische-filmschaetze.de or purchase it at numerous bookstores around town. It's worth it!