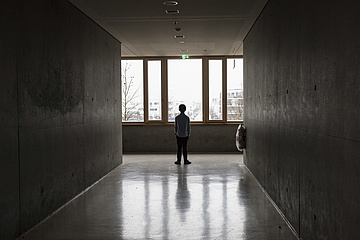 On Sunday, 08 April, the Frankfurt TATORT duo Margarita Broich as Anna Janneke and Wolfram Koch as Paul Brix will investigate for the seventh time. Their latest case, which was once again produced by Hessischer Rundfunkt, is entitled "Unter Kriegern". It was directed by Hermine Huntgeburth and the script was written by Volker Einrauch. Especially after the ghost story "Fürchte Dich", which led to quite mixed reactions last October, one can be curious what the fans of the investigator duo can expect this time. The content lets expect great suspense, but also dramaturgically hard fare:

In the basement of the sports performance center, the body of little Malte Rahmani is found. The chief detectives Anna Janneke (Margarita Broich) and Paul Brix (Wolfram Koch) are shocked and start investigating. They soon discover that the caretaker of the sports centre, Sven Brunner (Stefan Konarske), has often met with Malte away from the centre. In the following interrogations of Brunner, Janneke and Brix search insistently for the truth. The sports centre is run by Joachim Voss (Golo Euler) in an extremely strict and performance-oriented manner - he is aiming for a high sports official position. Voss also sets great store by the very highest standards for his twelve-year-old stepson Felix (Juri Winkler), both in sports and in school. Felix's mother Meike (Lina Beckmann) can hardly defend herself against the verbal and physical humiliations of her husband Joachim - in which Felix also likes to participate. The two "men" have formed an alliance against her. Voss controls and manipulates Meike and Felix by stirring up aggression and spreading fear, which ultimately results in violence.