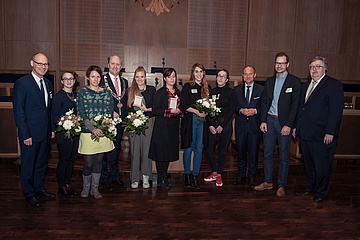 Since 2010, Tourismus+Congress GmbH (TCF), Dehoga Hessen Kreisverband Frankfurt, the Frankfurt Chamber of Industry and Commerce and the city's Department of Economic Affairs have been awarding the Frankfurt Tourism Prize. "The Frankfurt Tourism Award is intended to make the award-winning projects that enrich the tourism market known to a large audience and to motivate the tourism industry to continue looking for new offers and innovative ideas," explains Thomas Feda, Managing Director of TCF.

The award ceremony started with a real surprise: instead of three award winners as in the past, this year a fourth award winner was honoured. Singer Kiddo Kat received a special prize for her viral Youtube video "Subway Session Frankfurt" from the Frankfurt S-Bahn, in which she interprets "Kiss" by Prince together with Brit Heidi Joubert. "In the video, Frankfurt and its residents and visitors show themselves as cosmopolitan, friendly and hospitable. Frankfurt as a creative, life-affirming place. This is where people spend a good time. This is where friendships, partnerships, new ideas and sometimes even careers are born," said Mayor Uwe Becker in his laudatory speech. Musician Anna Guder aka Kiddo Kat made a special detour through Frankfurt on her concert tour to accept the award in person.

Third place went to "The Frankfurt BarBlog". The operators of the blog test Frankfurt bars and drinks and report on the bar scene. With the prize money of 1,000 euros, the founders Lisa Haag and Lena Streckert want to push the English version of the blog decisively. The online portal presents the most diverse hosts and locations and is thus a guide for Frankfurt residents and guests alike. "The blog is a great enrichment for city life and shows that Frankfurt has a truly diverse and sophisticated bar scene" Eduard Singer, chairman of Dehoga Hessen Kreisverband Frankfurt, is pleased to say.

The "Markt im Hof" in Sachsenhausen takes second place. "Within just a few years, the association has managed to establish an urban weekly meeting place with an exceptional culinary offering," emphasises Matthias Gräßle, Chief Executive of the Frankfurt Chamber of Commerce and Industry. "The offer is a great addition to the Brückenviertel and to Frankfurt's weekly market culture. In the meantime, the small market is almost no longer an insider tip, but is known through national press."

The first place and thus prize money of 2,500 euros goes to the Instagram Community Frankfurt. 130 participants from all over Europe with a cumulative 3.5 million followers, three days, 1.400 photos under #wwim13fra on Instagram, 30 million gross contacts and over one million likes, these are the key figures that the Instagram Community Frankfurt as organizer of the World Wide InstaMeet in Frankfurt have to show. The InstaMeet was organized by the administrators of the IgersFrankfurt on a voluntary basis and in their spare time. Martin Widenka, Kirsten Michalski, Kathi Schenk and Natanja Grün organized six different routes through Frankfurt am Main, the Palmengarten, to Höchst, to the airport, to the Felsenmeer in the Odenwald and to the Feldberg, partly with exclusive impressions and access.

"What is also particularly impressive about the project is that so many institutions and tourist service providers such as Lufthansa, the hotel industry or the cultural office were involved and supported the InstaMeet," emphasized Mayor Uwe Becker in his laudatory speech. "This shows the strength and also the willingness of the industry to engage in new and innovative ways of communication," Becker continued. The resulting images show the range of sights and city views. "We came to take pictures and left as friends," the organizers confirmed. Friends of Frankfurt they all are now