Frankfurt tourism figures: record results in May
from FFM Aktuell 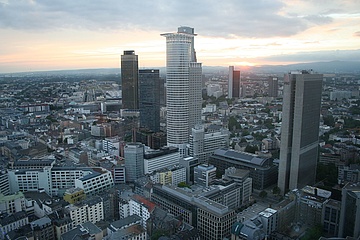 With fewer public holidays in May 2017 than in the same month last year, business was driven by three full business weeks and a stable private travel market. The flagship IMEX trade show also provided growth.

Bed occupancy was stable at 49.5 percent, which corresponds to an actual room occupancy of around 69 percent. The number of beds exceeded the 50,000 mark for the first time with 50,007.

From January to May 2017, 2,175,451 overnight visitors (+7.6 per cent compared to the same period last year) arrived, accounting for 3,740.063 overnight stays (+6.3 per cent), bringing significant growth to Frankfurt am Main as a tourist destination, which thrives on the strong domestic market.

In terms of overnight stays, the domestic market (+11.8 per cent) remains significantly more dynamic than the stagnating overseas market (+0.1 per cent). The largest overseas markets present a very mixed picture: while the USA (-0.4 per cent) is stagnating, China (+2.3 per cent) has recovered, whereas the Arab Gulf States (-15 per cent) continue to show significant losses.

Most notably, the foreign market results continue to reflect the impact of the tense security situation and the associated heightened sense of security among travelers, as well as the politico-economic situation in the respective markets.