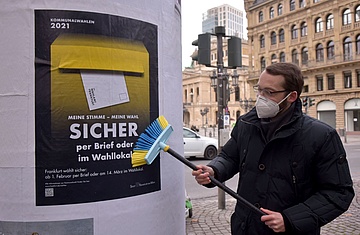 (ffm) With a poster campaign, the city of Frankfurt am Main points out that it is possible to vote safely in the local elections even under Corona conditions. "There is no reason to refrain from exercising the right to vote for fear of infection," said City Councillor Jan Schneider, who is responsible for elections, at the presentation of the poster motif, which has the motto "Frankfurt votes safely". "Already from February 1, postal voting is possible, where votes can be cast at home in a very convenient and contactless way. But also in the polling stations, of course, strict attention is paid to compliance with all hygiene and distance rules. Our first priority is to ensure that everyone has a safe and secure election."

In the coming weeks, posters at around 1,200 locations throughout the city will point out the various ways to vote, including on advertising pillars, in subway stations and on electricity boxes. A QR code that can be scanned with a smartphone will take you directly to the Internet site with more information and the form to apply for absentee ballots. "Take advantage of this opportunity," Schneider appeals to voters. He expects that this year the postal vote will be increasingly used. The administration is also well prepared for this in terms of organization.

On Sunday, March 14, the city council, the 16 local councils and the municipal representation of foreigners (KAV) will be newly elected in Frankfurt. "The organisation of the elections presents us with very special challenges against the backdrop of the Corona pandemic", emphasises Oliver Becker, Head of the Citizens' Office, Statistics and Elections. In coordination with the health department, a comprehensive hygiene concept for the polling stations was developed. "Disinfectants, floor markings, disposable masks as well as clearly visible signs are planned," explains Becker. In smaller polling stations, Plexiglas screens will also be installed to protect the election workers.

As it is expected that more use will be made of the postal voting option, the number of postal voting districts has been increased from 117 to 140. As in previous elections, absentee ballots will be counted at the fairgrounds. In order to be able to comply with the distance rules, 50 percent more space than before is available for this purpose.

The absentee ballot documents can be downloaded online at http://www.frankfurt.de/wahlen, by e-mail to briefwahl@stadt-frankfurt.de or by post, for example using the form on the back of the election notification. Those who do not want to have the documents sent by post can also pick them up directly at two postal polling stations by prior appointment. In the city center in the Lange Straße 25-27 and in the Bürgeramt Höchst in the Dalbergstraße 14 are sufficiently sized rooms available for this purpose. There it is also possible to fill in the ballot papers directly and to throw them into the respective ballot boxes. In Lange Straße, there will also be the option of receiving the documents at an outside window at the gate. "This will give us a kind of drive-in polling station," Schneider explains. "You can pick up your voting documents there without entering the building - whether you come on foot, by bike or by car."

A total of about 6500 election workers are needed to conduct the elections. "A gratifyingly large number of volunteers have already contacted us, including many who have already participated in many elections," Schneider said. "Without this volunteer commitment, it would not be possible to organize the elections." However, there are still gaps in some polling stations. Schneider is therefore appealing to the people of Frankfurt to come forward to help out on election Sunday. "We have taken precautions to ensure that the service in the polling station is as safe as possible," the city councilor emphasizes. "Among other things, extra-safe FFP2 masks will be provided for all poll workers." As an expense allowance, the members of the election committees receive - depending on the function - 65 or 70 euros. Registration is possible in various ways: by e-mail to wahlvorstaende@stadt-frankfurt.de or by telephone on 069/212-34912. In addition, with the support of the Office for Information and Communication Technology, an online form has been developed for the municipal website, which can be used, among other things, to indicate the desired location. "This is another example of how the digitalization of the administration facilitates contact with citizens," says Schneider.

Further information about the elections is available at http://www.frankfurt.de/wahlen available.