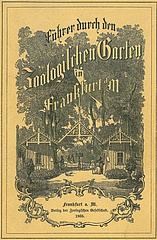 Happy Birthday! One of Frankfurt's most beloved institutions is celebrating a milestone birthday. It has been 160 years since Frankfurt Zoo first opened its doors. A lot has happened at Germany's second oldest zoo since 8 August 1858. But on its birthday, the zoo not only looks back with pride, but also looks forward with commitment. Because the zoo has a lot planned for the future - especially with regard to its development as a nature and species conservation centre in the heart of the Main metropolis.

When you consider how extensive and elaborate the planning and construction of zoological facilities still is today, and how many people are involved in the planning and realisation, you can only take your hat off: The scheduled date for the completion of the zoo in 1858 was exceeded by only eight days. On August 8, 160 years ago, the Frankfurt Zoological Garden opened to the public for the first time, initially in the Leers' Garden in Bockenheim.

To make this possible, the Zoological Society was founded in 1857 by wealthy citizens of the city. There were still few role models for a zoo operation in Europe, but great dedication was devoted to establishing a place where outdoor recreation could be combined with the study of nature. "Then as now, the zoo is not only the city's most visited recreational facility for Frankfurt, but an important site for education, research and nature conservation. People of all ages and different backgrounds come together at the zoo to experience nature in the middle of the big city. An unbroken fascination for 160 years," says Ina Hartwig, Head of the Department of Culture and Science, who is now responsible for the zoo. In the turmoil of the First World War, the Frankfurt City Council took over the zoo operation from the Zoological Society in 1915.

The zoo could be realised because numerous citizens secured the financing by subscribing to shares and with the help of donations. Public attention was correspondingly great. The opening of the zoo was a topic of discussion throughout Germany, as a report in the Leipziger Dorfanzeiger of 4 September 1858 shows: "At the opening of the zoo . the influx was very great. Despite the ban, people could not refrain from throwing all kinds of nibbles to the animals. The other day nearly all the animals were suffering from spoiled stomachs ."

Zoo visitors could marvel at animals from every continent, with reptiles, amphibians, and even fish on display in addition to mammals and birds. The animals were housed "according to their species", as had already been announced in the "Denkschrift über die Gründung eines Zoologischen Gartens in Frankfurt am Main" of 1857.

Few illustrations exist from the zoo's founding period. The Leipziger Illustrierte Zeitung of 27 April 1861 describes a visit to the zoo thus: "... our gaze soon falls on a large portal . with two handsomely decorated porter's houses in the background. At first we see only flower beds at our feet and before us a magnificent forest of old trees, but the welcome of the macaws and cockatoos hovering under the trees soon tells us that we are in the right place."

At first, the zoo was located in Leers's garden on Bockenheimer Landstraße. But soon the area became too small. A new area was found at the Pfingstweide in the east of Frankfurt. In the spring of 1874, the time had come: nearly 1,200 animals ranging from water fowl to elephants were moved across town to the new location, and some buildings also moved with them.

Today, about 4,500 animals of about 450 species live in the zoo, most of them in the Exotarium and in the Grzimek House for diurnal and nocturnal animals. In 2008, Frankfurt Zoo gave itself a strong motto: "Experience animals - preserve nature". Since then, it has been gradually developed into a modern nature and species conservation centre. Many new animal facilities have been created, such as the "Borgori Forest" with its focus on the great apes, the South America facility "Ukumari Land" and the Humboldt Penguin facility currently under construction.

Since the beginning of 2018, Miguel Casares has been the 13th director of Frankfurt Zoo. He thus follows in the footsteps of such outstanding zoologists as Max Schmidt, Kurt Priemel and Bernhard Grzimek. Casares is fully committed to species-appropriate animal husbandry at the zoo and to the protection of nature and species: "In my eyes, zoos are cultural institutions where people can get excited about animals." To make the zoo fit for the future, he wants to develop a sustainable zoo concept that creates a clear link between the conservation of endangered animal species in the zoo and the protection of their natural habitats. His partner in this endeavour is the Frankfurt Zoological Society (ZGF) - now one of the world's most important conservation organisations with its headquarters in the Zoogesellschaftshaus. And, of course, the needs of visitors for contemporary knowledge transfer and recreation remain at the top of the agenda.

More information on the history of the zoo:

The Frankfurt Zoological Society has published a blog with short stories from the field to mark its 160th anniversary: