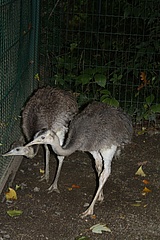 (kus) A colourful community is complete again - on the large Max Schmidt enclosure, pampas hares and vicuñas have been joined by nandus. However, you have to look very closely to discover the two South American ratites. They are still small fledglings, initially housed in a segregated area at the far end of the facility to acclimate.

The two female nandus hatched on June 28 at Safaripark in Hodenhagen, Lower Saxony. Here in Frankfurt, they are currently still inhabiting a segregated area at the Max Schmidt facility. If you are lucky, you can spot them through the fence at the end of the enclosure. They still have to grow and get used to their new roommates, the pampas hares and the vicuñas.

"Probably next spring, they will no longer be seen only from a distance through a fence, but in full splendor on the enclosure," explains Zoo Director Professor Dr. Manfred Niekisch.

Until October 2016, Darwin's nandus (Pterocnemia pennata) lived on the enclosure. Now the flightless nandus (Rhea americana), which can reach a crown height of up to 130 centimetres, once again share the habitat with two other South American species. Their interaction is not only beautiful to observe. It also provides the animals with plenty of stimulation and variety