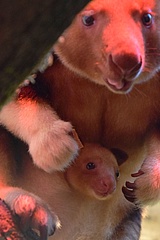 Happy news from the Frankfurt Zoo: There are offspring to report again. The lucky mum this time is the five-year-old Goodfellow tree kangaroo Jaya-May, who already gave birth to her young one in mid-May. Now the little one has started to poke its head out of its protective belly pouch to explore its surroundings.

The little tree kangaroo is developing splendidly. Zoo director Professor Manfred Niekisch is very pleased about this: "Everything looks very good. Jaya-May is taking excellent care of her offspring. We hope that this time everything will go well, because Jaya-May's last cub died shortly after leaving the pouch. This was a great loss given the great rarity of the animals."

Jaya-May came to Frankfurt from Rostock in September 2015. Tree kangaroos are solitary animals that only come together to mate. From the ten-year-old Samari, who has lived at Frankfurt Zoo since 2012, the female is therefore kept separate as long as she is not in a fertile phase.

Samari is also the father of the young animal that the female Belisi carries in her pouch. Belisi came to Frankfurt from Krefeld Zoo in April 2017 in coordination with the European Conservation Breeding Programme (EEP) to be mated here. After successful insemination and the birth of the young animal, she went back to Krefeld in August. In exchange, the ten-year-old female Nunsi arrived from Duisburg in October. "We hope that Nunsi will also take up and have offspring from our male before she goes back to Duisburg," says Niekisch. "Establishing a stable zoo population is so essential for this now very rare species that the effort to temporarily move the animals to other zoos for breeding is more than justified," explains the zoo director.

Ina Hartwig, Head of Department for Culture and Science, is particularly pleased that Frankfurt is making an important contribution to the conservation of the species here: "At the moment, Frankfurt Zoo is the only zoo in Germany and one of the few zoos in Europe that succeeds in breeding the endangered Goodfellow tree kangaroos. It shows us how far-reaching the tasks of scientifically managed zoos are - they clearly go beyond animal presentation and knowledge transfer."

Because of their reclusive lifestyle in the treetops of Papua New Guinea's rainforests, little has been known about Goodfellow tree kangaroos (Dendrolagus goodfellowi buergersi). In the Red List of the World Conservation Union IUCN they are classified as endangered. In their native country, they are particularly threatened by habitat loss - for example through coffee cultivation - but also by hunting. Goodfellow tree kangaroos are one of only six species currently listed in the Global Species Management Plan (GSMP). Organized by the World Association of Zoos and Aquariums (

), the program organizes the worldwide breeding of endangered species with genetically balanced populations. This means that there are so few individuals of a species in zoos worldwide that long-term survival can only be ensured if the world zoo population is scientifically managed in its entirety
Share: