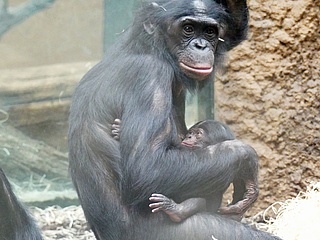 Thankfully, there is good news from Frankfurt Zoo again: there have been three offspring among the primates to report in a very short time. The first was a white-cheeked crested gibbon on 15 January. And just a few days later there was the good news of two bonobo births to report.

The addition of the small gibbon family is particularly beautiful. The female ELLIOTT and her partner MOHIO, who came to Frankfurt Zoo at the end of 2019, have thus for the second time offspring together. Their first cub, born last spring, sadly died after a few days. Everything is currently looking good for the new offspring. ELLIOTT is taking very good care of the little one, which, clinging to her belly, is already very attentive to its surroundings.

"I am very pleased that the lives of the animals at Frankfurt Zoo continue as normal despite the lockdown and that we also receive such nice news from the closed zoo. A special thanks is due here to the employees who, despite the increased workload and the division into teams, are doing an outstanding job for the zoo and its animals," says Dr. Ina Hartwig, Head of Department for Culture and Science. "We all very much hope that visitors will soon be able to enjoy the zoo and all the interesting young animals again."

White-cheeked crested gibbons are among the extremely endangered monkey species. According to the IUCN Red List, they are threatened with extinction. Above all, hunting, illegal trade and the dramatic loss of their habitats through deforestation of rainforests is putting massive pressure on the populations of all free-living gibbon species.

So Frankfurt's blond-headed gibbon is a real ambassador for nature and species conservation, because the relatives of the gibbon species living in Frankfurt are not doing any better. The Stiftung Artenschutz has therefore been running a conservation project for the endangered yellow-cheeked crested gibbons (Nomascus annamensis) in Vietnam since 2016. The aim is to protect the gibbons' habitat in Vietnam on a large scale in order to ensure the survival of the species. Frankfurt Zoo also supports the Stiftung Artenschutz and its projects. The Stiftung Artenschutz also supports the work of the Frankfurt Zoological Society (ZGF) on site. The focus is on gibbon conservation in Kon-Ka-Kinh National Park, which is home to yellow-cheeked gibbons as well as other endangered species. "We support the approximately 42,000-hectare national park by conducting an annual census of gibbon groups in the park, promoting ranger training and providing their equipment. The rangers go on patrols in the park and always come across illegal activities. They remove the poachers' snare traps and their illegal camps," says Dr Antje Müllner, Head of the Southeast Asia Department, describing how the ZGF is helping to protect the animals on the ground.

Bonobos' offspring - not only beautiful, but also important

Great joy also in the Borgori Forest. There, two bonobos were born on January 30 and February 6. Mother of the first child is 13-year-old HANNA. She came to Frankfurt from Milwaukee in the USA in 2018. The little one, whose gender is not yet known, is her first cub, which HANNA has nevertheless routinely taken care of since birth. With bonobos, it is not always so easy to determine who the father is. Although there is only one adult male in the group where HANNA has been living for the past few months, it is not uncommon for bonobos to mate with males outside their own group.

To have HANNA come to Frankfurt from the US and now provide offspring here is a significant achievement. Actually, the breeding program for bonobos is run on a European level. The EAZA Ex-situ Programme (EEP), which has been in existence since 1985, is coordinated by Antwerp Zoo, as is the International Studbook. However, close cooperation with the American Species Survival Program (SSP), as in this case, is extremely important due to the relatively small population of bonobos.

"Frankfurt Zoo has been breeding bonobos for many years. In 1962, the world's first breeding succeeded here. Since then, 42 bonobos have been born at our zoo. We are very proud of this," says zoo director Dr. Miguel Casares. "We are very happy that the cooperation on an international level works so well. That a new genetic lineage is now represented in Europe thanks to HANNA and her cub is very important for the establishment and maintenance of a long-term stable and genetically diverse bonobo population in zoos."

Exactly one week after the first birth, another offspring presented itself to the bonobos: On February 6, MIXI gave birth to her third child. Again, the sex could not be determined so far. MIXI is 19 years old and a relaxed and experienced mother.

Since 1996, bonobos, which are found only in a relatively small area in the DR Congo in central Africa, have been considered critically endangered, according to the IUCN. Like gibbons, the bonobo population is also coming under pressure, mainly due to habitat destruction and ongoing poaching.